So, I let Nic choose the beer tonight and she chose the Stone Ruination IPA. I’ve heard great things about this and I’m very excited to try. I purchased this as a result of a recommendation from a co-worker (thanks Hugh!). 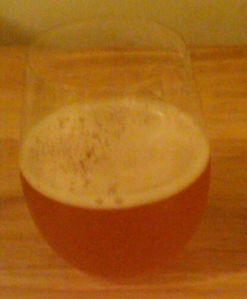 Trivia: This beer is called “a liquid poem to the glory of the hop.” Let’s see if it stands up to that tagline!

Random: I’ve never been into IPAs, but I’m starting to like them. So, this should be a good beer to see if I’m getting into them.

I pour the beer into a stemless wine glass to try to get more of the scents. It pours with a one finger head and is a golden orange color. Nic remarks that it’s “cloudy like a wheat beer,” and I’m forced to agree. The carbonation is there, but not all that visible due to the cloudiness. We both agree on getting pine, hops and grapefruit on the nose. The taste she says is “grapefruit bitter.” On first taste, I get bitterness and pine and grapefruit. It’s also got a lot of carbonation which gives it a nice mouthfeel. The piney taste stays on the aftertaste, but it’s not unpleasant. All of the flavors work together in concert. There’s no real sweetness to it (which is nice after all the fruit and wheat beers I’ve had lately), but is pretty refreshing. The more I drink it, the more the pine seems to come out. According to the bottle, it’s a “palate ruiner,” which I can see due to the bitterness and the intensity of the flavors (it’s 100+ IBUs). For 7.7%, this brew also hides its alcohol well. Nicole thinks that it’s a little too bitter for her, but not bad. I think, “damn, this is good.” She also admitted that she’s not a huge IPA fan. A few minutes later, after I threaten to take her glass, she says she’s actually enjoying the aftertaste on her tongue. After drinking this, I’m going to have to explore some more IPAs. If you haven’t tried it, go out and get a bottle of this, but you may not want to share it.