I’m not what you would call a DFH fanboy. When I first had some of their beers, prior to the blog, I really didn’t know what all of the fuss was about (I think I had the Festina Peche, and it was just too much for a new beer drinker to handle). I’ve since had a bunch of DFH beers and now understand what the fuss is about. I look to DFH 60 Minute as an everyday fallback beer (which I do prefer to the 90 Minute). So, I’m hoping this IPA holds up to my expectations. 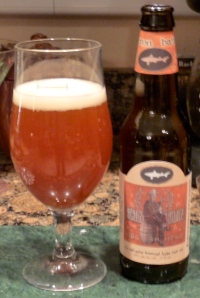 Trivia: I love all the info that DFH has on their website about their beer, “This is a blended beer that we’ve been brewing for the past several years and it’s recently been gaining in popularity. For Burton Baton we first brew two ‘threads’ or batches of beer: an English-style Old Ale and an Imperial IPA. After fementing the separate beers in our stainless tanks, the two are transferred and blended together in one of our large oak tanks. Burton Baton sits on the wood for about a month. When enjoying the Burton Baton, you’ll find an awesome blend of the citrus notes from Northwestern hops melding with woody, vanilla notes from the oak. The wood also tends to mellow the 10% of the beer – so tread cautiously!”

Random: I picked up a four pack of these because I was having a major hop craving and just wanted to sit and enjoy the brew as opposed to reviewing it. This brew was really good.

This brew poured with a two finger pure white head that left significant lacing on my Flying Fish tulip glass. The head took about three to four minutes to dissipated. The body is a cloudy orange-brown color. There is no visible carbonation on the brew due to the cloudiness. The nose has a hint of booze with some pine and grapefruit as well. This smelled exactly what I would expect from an IPA. The taste is really smooth with some mild carbonation. There was lots of pine and pleasant hoppiness. The booze is barely noticeable, just like the warning from DFH, it’s totally mellow. The finish lingered with the expected pine. I really loved this beer. I would definitely have this beer again.