So, funny story. Last night, after I drain poured the beer I tasted, I opened a Victory Headwaters Pale Ale. I was sitting on the couch, playing on my phone and I see my cat come prancing up the stairs. Now, my cat usually doesn’t prance. He usually does what you see below… 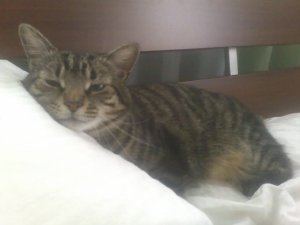 Anyways, he comes prancing up the stairs with fuzz on his mouth. I briefly wonder what he could have gotten into down there and go back to my phone. He walked towards me and then I realized what he had in his mouth. A mouse. He then proceeded to put the “gift” on my foot (and of course, I wasn’t wearing shoes). The “gift” was not completely dead and instead attempted to get away. I proceeded to jump on the couch and and yelled at my cat to get it. So, fun and exciting night last night. I’m hoping tonight turns out to be better. I started the night with a St. Bernardus Abt 12 while waiting for the Phillies game to come on (awesome beer by the way) and now I’m on to tonight’s selection.

Trivia: According to the brewery website, “A wonderful return to nature, with a flavour of yesteryear, this is a beer that is drawn from wooden barrels to fill so many mugs in our Flemish bars! Brewed by infusion with strong and hearty Flemish hops, then fermented using top yeasts, 3 Monts is perfectly balanced between malt aroma, fruity flavours and bitterness. The head is generous, dense and long-lasting. The best way to taste the 3 Monts beer is in a cool cellar (like the ones in our Flemish houses, which are between 8 and 12°C)!”

Random: I have never heard of this beer before, but it’s gotten really good reviews.

The brew poured with a two-finger white and fluffy head on a clear golden-yellow body with lots of active carbonation on the brew. On the nose, there was definitely some grass with some fruit and yeast. But the nose was pretty light. The taste of the brew initially struck me as very light and crisp. I got a bit of Belgian yeast with some spice. I also got a bit of light fruit like green apples and pears. The alcohol is really well hidden on this. The finish was light and crisp. This is definitely a great spring beer and this could easily be the favorite beer I’ve had of this style. I would definitely try to get my hands on this one.

One thought on “3 Monts”