For some reason, I’m tired after a day of not doing much. Well, that’s not true. I shopped with my sister and walked around Princeton. I also stopped in a beer store in Princeton and picked up a few beers (I was actually good and only walked out with three bombers). I got Mikkeller Beer Geek Brunch Weasel, Firestone Walker Double Jack and Firestone Walker 14. We also stopped at House of Cupcakes, which won Cupcake Wars on the Food Network and walked out with a dozen assorted cupcakes. I tried the Red Velvet cupcake and it was pretty good. So, to wind down the night, I’m going to crack open another brew I picked up in Pennsylvania. 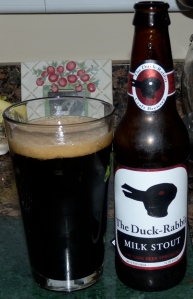 Trivia: According to the brewery website, “Paul Philippon is the founder of The Duck-Rabbit Craft Brewery. Years ago, before he became a professional brewer, he made his living teaching university philosophy. A version of the duck-rabbit diagram, which looks like a duck or a rabbit, depending on the viewer’s perspective, appeared in a philosophy book Paul admires (Philosophical Investigations by Ludwig Wittgenstein). He liked the idea of using a logo with ties to his former life.”

Random: This brewery also calls themselves the “dark beer specialists.”

I tend not really enjoy milk stouts for some reason. I much prefer Russian imperial stouts. I think that I’m just not a big fan of the sweetness that the lactose imparts. Hopefully, I enjoy this brew. The brew poured with a one finger off white head on a black body with no visible carbonation due to the color. The nose of the beer has lots of happy stout-y smells. I got a bit of coffee and some sweet cream. On the first sip, I got a lot of roasted malts with a bit of coffee, albeit less than was apparent in the nose. The lactose on this took a back seat to the roasted malts and only became apparent on the finish. this could explain why I’m digging this beer. The body itself was pretty light and dare I say it, crisp for a stout. The medium carbonation really helped impart this. Although I really enjoyed this beer and would have it again, I’m not sure that this would be the best example of a milk stout. The sweetness that I’m used to in a milk stout just wasn’t there. With that being said, I would definitely have this again.