Another quick review before I go to bed. This is from a six-pack that Katie picked up for me. Isn’t she so thoughtful? She actually read my reviews to try to pick out beers for me. This beer will also mark the last beer of my English beer theme. Next up? Six California beers…with some other stragglers thrown in before I break out some Irish themed beers for St. Patrick’s Day. So, onto the brew! 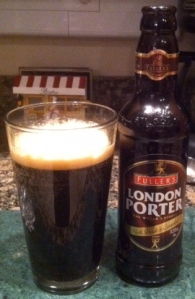 Trivia: According to wikipedia.com, “Fuller’s London Porter. London Porter is available in pasteurised 50 cl bottles and in Fuller’s tied houses as a seasonal cask ale.”

Random: I cant believe that Santorum is getting so many votes. Ugh.

This brew poured with a full finger of tan head on top of a dark brown body with moderate visible carbonation despite the color. The nose was absolutely divine on this brew. It was filled with roasted malts, chocolate and a bit of coffee. The taste was just as amazing as the nose. It started with a healthy dose of roasted malts, milk chocolate, coffee and a hint of sweetness. As I sipped on the brew, there was also a hint of smoke. The body was thicker than what I’m used to for a porter, but it really worked for this beer. The mild carbonation on the taste also helped with the complexity of the brew. The finish was actually pretty quick on the brew with hints of chocolate and coffee. This beer was nothing short of amazing. The body was perfect and the flavors delivered. Most definitely one of the best porters that I ever had. Another shining star from Fuller’s.