Today was another busy day at work. I capped it off with a really good chest/biceps/calves workout at the gym. It was an absolutely beautiful day out and on the drive home, I listened to more of my ESPN audiobook with the windows down. It doesn’t get much better than that. Tonight I’m having another beer from my “Irish” six-pack, although most people know that this is made by Coors. I don’t have high hopes for this one… 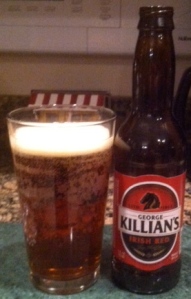 Trivia:  According to the brewery website this is what the brew should taste like, “Toasted/roasted caramel malt introduction with nice bready characteristics.”

Random: This is one of the beers that I used to drink when I first turned 21. I think the experience tonight is going to be a bit different.

I pulled the bottle out of the fridge and initially noticed that this was a screw off cap. This is not a good sign. The brew poured with a half finger of off white head which was surprising. It lasted for awhile too, but didn’t leave any lacing on the glass. The body was a clear reddish-brown with a huge amount of carbonation visible. The nose started with some sweet bready malts with a hint of metal behind it. The taste was on the sweet side. It had a lot of sweet malts that followed up with a flavor of buttered bread. The body was middle of the road with a lot of carbonation. The finish was relatively swift with a bit of the sweet malt that made itself well-known in the flavor. Although I used to love this beer when I was younger, I just didn’t have the same affection for it now. It’s drinkable, but I wouldn’t rush back to have this. Yet, it does have a bit more flavor than the typical macros.