It’s almost the weekend. After a good workout at the gym and a trip to the library to pick up some more audiobooks (given that I commute about 2.5 hours a day, it’s at least semi-productive), I hopped in the shower and then watched the end of the Phils game. Katie also brought dinner over and was “watching” baseball with me as well. This turned into making fun of me with my sister. Anyways, here’s the start of the dark beer sixpack… 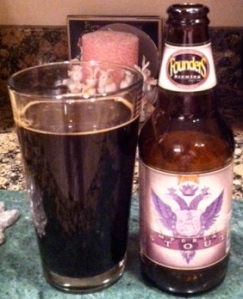 Trivia: According to the brewery website, “Brewed with ten varieties of malted barley, this stout is smooth as silk, yet complex and rich in body. Serve this guy at cellar temperature. Put another log on the fire, sit back, and enjoy the friendship of this ultimate winter warmer.”

Random: I really wish Howard and Utley would come back…

This brew poured with a barely there tan head, which was a little surprising. It dissipated almost instantly and left no lacing on the glass. The body was a dark brown, almost black with no visible carbonation due to the color. I let the brew warm for about 15 minutes so that I could get all of the flavors. Once it was warm, I took a sniff. Wow, the nose was amazing. I got lots of dark chocolate and coffee in the front, followed by some vanilla and roasted malts. The taste was just as good as the nose. It started with espresso notes and moved into dark chocolate. Then, I got a decent amount of bitterness. The booze was invisible on this brew. The body was thick with mild carbonation. It finished slowly and warmly with the same coffee and bitterness that I got in the taste. Another lovely brew from Founders that I will definitely have again.

One thought on “Founders Imperial Stout”