I will admit, I bought this beer because I thought it was adorable. I mean, who can really resist a can of beer with a pig wearing a hat and glasses on it? I know I can’t. Plus, it has a cool name. Let’s crack this one open. 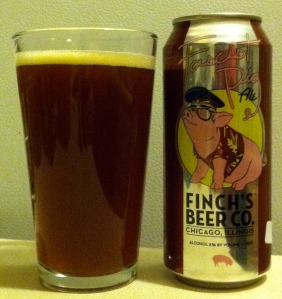 Trivia: According to the brewery website, “Fascist Pig is a deep red, malt-forward ale brewed with plenty of caramel malts and a touch of rye for a hint of spice. This big American red ale is brewed and dry-hopped with palisade, an earthy and somewhat floral, mentholated American variety, and Zythos, an American blend that leans strongly toward Amarillo, Simcoe and Cascade varieties.”

Random: I love when I get up on a Sunday morning and can’t sleep past 7:30 because a meow wants to get fed.

This brew poured with a half a finger of slightly off white head that dissipated rather quickly and left no lacing on the glass. The body was a very cloudy chestnut color with minimal carbonation visible. The nose was filled with earthy caramel malt that had a touch of sweet toffee right after. The taste started with rich caramel malt and some deep nutty flavors and biscuity malt. The sip ended with a significant oily hop note that was pretty piney. The body was on the oily side with pretty weak carbonation, which could have been dialed up a bit. The finish was long and hoppy with a touch of booze burn at the end. It reminded me a lot of a light barleywine, but nothing that I would rush back to have again.