Right before Easter, a member of my staff brought in Jelly Belly jelly beans, which I hadn’t tried in years. My favorite flavor when I first had them was “juicy pear.” After having them last week, I can say that “juicy pear” is still one of my favorites. So, when I saw this beer on the shelf, I decided to give it a try. 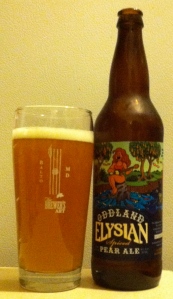 Trivia: According to greatbrewers.com, “The newest addition to Elysian Brewing’s Oddland Series will be Spiced Pear Ale. This unique ale was brewed with pears, Yakima Cascade and Czech Saaz hops, and finished with a bit of cumin and cardamom for an exotic Asian-fusion flavor. Expect to see this starting July 15 2013 as well as at the Oregon Brewers Festival July 24-28 in Portland. Oddland Series.”

Random: I’m not quite sure what a woman with a bikini top playing a ukelele has to do with this beer, but I guess the label is okay?

This brew poured with a one finger, white head that dissipated quickly and left very little lacing on the glass. The body was a cloudy, dark orange color with moderate carbonation visible. The nose was really, really unique. I got cardamom and cumin off the bat and then some pear and lemon and well. The taste was more pear dominant, but there was a marked spice note with cardamom first and then cumin. There was also some grassiness and bitterness from the hops at the end. The body was on the medium side with high carbonation. It had a long finish with spice. This beer was definitely different and interesting. I don’t know if I could have a lot of these, but a glass of this was enough and definitely unique.