When my other half called me from the beer store in New York and said that she saw this beer, I told her to buy it. One of the things that surprised me was that I had never heard of it. After doing a little bit of research, I realized that it as new. One of the things that made this attractive was the name of the beer. Since I work in transportation, I have been to many a safety meeting. One thing that they all seem to have in common is how incredibly dry and boring they are. The last one that I went to for the job I currently have featured an awful cartoon on safe truck operations. So, I totally get the label graphic. Way too well, in fact. So, let’s see if the beer was more interesting than a “safety meeting.” 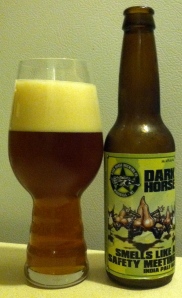 Trivia: This beer was released on April 20th on draft and in bottles shortly thereafter.

Random: I really do find the label hilarious.

This brew poured with a very thick, two finger tan head that dissipated slowly and left lots of lacing on the IPA glass.The body was a hazy, deep orange color with relatively high carbonation. The nose was filled with tropical fruit, pine sap and very high amounts of hops with some booze. The taste started with big citrusy hops and tropical fruit, specifically papaya. It then had a big sweet notes with caramel and bready notes. It had a slight bit of alcohol burn to it. The body was medium thickness and quite dry. The finish was quick with pine sap. This was only alright. I expected a bit more.