One of the things that annoys me when reviewing beers is when I unknowingly write up an entire review for a beer that I’ve had a few years ago. This hasn’t happened in awhile until tonight. The brewery changed the label on the beer, so I didn’t realize until I almost posted the same review that I had already reviewed. So, instead I’m posting a review on a beer that Val let me sample tonight. 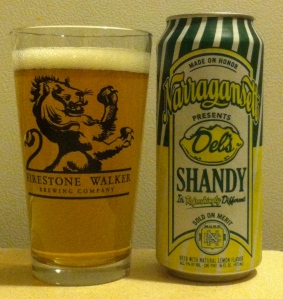 Trivia: According to the brewery website, “Narragansett Del’s Shandy is a collaboration between two iconic Rhode Island brands. The Shandy is available in six packs of 16-ounce cans and on draft throughout the summer. The beer contains 5.0% ABV and 14 IBUs (International Bitterness Units). The Narragansett Del’s Shandy is the perfect thirst-quenching balance of our gold medal Lager with Del’s lemon concentrate…brewed under the supervision of award-winning Brewmaster Sean Larkin. ‘Gansett’s Lager is the highest rated domestic Lager according to Beer Advocate, while Del’s Lemonade has been Rhode Island’s favorite summer treat for over six decades.”

Random: This beer had a retro feel to the can which was pretty cool.

This brew poured with a half a finger of white head that dissipated quickly. It left slight lacing on the glass, along with a crown on top of the clear, straw yellow body. There was moderate carbonation visible. The nose was had notes of melted lemon Italian ice with some syrupy sweetness. The taste was really off-putting. It had melted lemon Italian ice, like the nose, but then it had some sour notes with wheat and soap. The body was on the thin side with moderate carbonation. It had a long finish with lemon dish soap. I didn’t like this one at all. For $1.99 a can, this luckily wasn’t expensive. I know that shandies are all the rage these days, but I couldn’t stand this one. I wouldn’t recommend this.