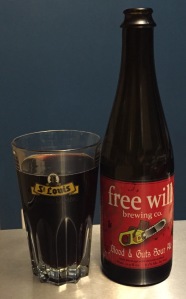 Trivia: According to the brewery website, “This black ale fermented with our own sour culture, on top of second-use cherries, in the traditional style of a kriek lambic is a Free Will original. Notes of chocolate, and a mild roasty character are combined with the funk and complexity of wild yeast, and balanced by a clean sour note that follows you through the finish, where the cherry character shines through. Pair this with Korean BBQ or rich, creamy pasta dishes.”

Random: This beer is a spring release.

This beer poured with a half a finger of khaki head. It dissipated instantly and left no lacing on the glass. There was a hint of a crown left on top of the dark brown body. There was no carbonation visible. The nose was tart cherries, funk and vinegar. After a few sniffs, I picked up oak as well. The taste wasn’t nearly as tart as the nose implied, although it was still the dominant flavor. It did have cherries that were prominent as well. Vinegar was strong in the beer too. Oak was at the end of the sip and became more apparent as the beer warmed. The body was on the thicker side with high carbonation. The finish was lengthy with oak and cherries. The price on this bottle was $13.99, which came to $.87 per ounce, which was a bit expensive. I liked this beer, but the flavors didn’t transition smoothly. It was like you’d get sour, then immediately cherry, then only oak. I wouldn’t rush to have this again.