I was excited to crack this beer open after my parents brought it back from Massachusetts. It’s also the first beer I’ve ever had from Wicked Weed. 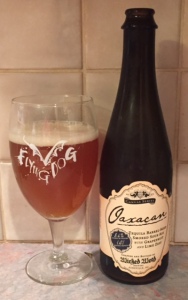 Trivia: According to the brewery website, “In 2009 Walt and Luke Dickinson sat at a craft beer bar and talked about the dream of opening their own brewery focusing on big, West Coast hoppy ales and authentic Belgian ales brewed to inspire those who drank them. There would be no looking back. Over the next two years, a preliminary business plan was developed and test batches were brewed. In 2011 Walt and Luke’s lifelong friend Ryan Guthy and his parents Rick and Denise all sat down at the Guthy’s house in the mountains of Western North Carolina to taste Luke and Walt’s creations while discussing ideas and strategies for what would become Wicked Weed Brewing. After discussing and weeks of thoughtful research and soul searching the Guthys joined the Dickinsons.”

Random: I wish I could get more of this.

This beer poured with a half a finger of white head that dissipated quickly and left no lacing on the glass. The body was a hazy, orange color with some visible carbonation. The nose was incredibly fragrant. I picked up vanilla and oak up front, but then I got some lime. The nose didn’t make me think this was going to be a tart beer. The taste was more dry than tart. The first notes that I got were vanilla and oak, but then tequila and lime came through next. There was also an agave note. The funk didn’t make this tart, but instead dried this beer out. I couldn’t pick up any alcohol on the flavor. After a few sips, some dried grapefruit peel was there as well. It had a medium thick body with light carbonation. The beer had a quick finish with lime and tequila. This beer was simply outstanding. I have no idea how much it cost since it was a gift, but I would highly recommend it.