Since I was in Ohio for so long, I tried a different hotel my second week. This was a mistake. I stayed in the Holiday Inn, which apparently had a lot of truckers who liked to play cornhole outside of my window until 2 AM, while drinking and smoking cigars. If I didn’t have to be at work at 4:45 AM, I may have been into this. I bought one of these hoping that it would help me sleep. Needless to say, it didn’t. 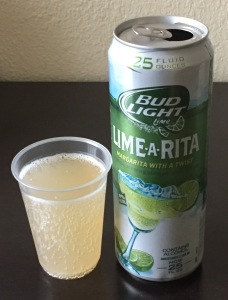 Trivia: According to the brewery website, “Exciting margarita flavors mixed with a twist of
Bud Light Lime for a refreshing finish. Best served over ice.”

The beer poured with a quarter of a finger of white head that dissipated instantly and left no lacing on the plastic cup. The body was a cloudy, greenish-yellow and had light visible carbonation. The nose was filled with artificial lime juice and sour mix. To say that the scent was off-putting would be an understatement. The taste wasn’t any better. It was the same artificial lime note and syrupy with white sugar. It had a cheap tequila note with salt. Alcohol was very apparent on this one. The body was thin with light carbonation, which didn’t add to the drinkability. It had a lengthy and sticky lime finish. A can of this was $2.49, which came to $.10 per ounce. Despite the low price on this, it was terrible and I couldn’t finish this. Avoid this one.