Tonight’s selection is another beer from Departed Soles that I picked up at the local beer store. 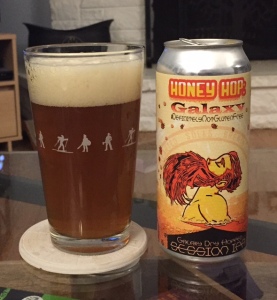 Trivia: According to the brewery website, “Departed Soles Brewing Company opened its doors in the Powerhouse Arts District in Downtown Jersey City in the summer of 2015. While the brewery produces all sorts of Craft Beer, it is proud to be New Jersey’s first Craft Brewery offering Craft Beer with 100% Gluten Free ingredients that can compete on the palate with traditional ales! Departed Soles Brewing Company was initially a brew pub concept – the hair brain scheme of two best friends, sitting in one of their parents’ house… drinking. One had a passion for craft beer and bar experience, while the other a way with people and resume full of restaurants; both with a passion for sneakers. Unlike virtually every other set of friends that has this conversation though, one of those friends had a personal motto: ‘DON’T TALK ABOUT IT, BE ABOUT IT.’ As time went on, each continued along their chosen career paths; one – Chris – a teacher, the other the Business Manager for his family’s funeral home. The Teacher would antagonize the Business Manager, Brian Kulbacki, that he’d never leave the family business and take the risk to chase his dream.”

Random: The cats like ham. We made black bean soup with ham and the cats went crazy for the ham.

This beer poured with a thick, two finger, white head. It went away slowly and left a lot of lacing on the glass. The body was a murky brown with high carbonation visible despite the cloudiness. The nose had a lot of lot of mango, passionfruit and other tropical fruit with orange pith. There wasn’t any malt to it. The taste was earthy with wet dirt and grass and didn’t have the tropical fruit that the nose did. It had a lot of caramel malt too. The body was thicker than I expected, especially given the ABV. It had moderate carbonation as well. The finish was quick with wet dirt and grass. The beer was $2.50 for the can, which broke down to $.15 per ounce. I wasn’t a big fan of this beer. It needed to deliver on the nose and all of the tropical hops.