We picked up a Magic Hat mixed pack, as we usually do. There were more beers in there that I reviewed and this was the only one I hadn’t. Plus, the label was exceptionally cute. Let’s crack it open. 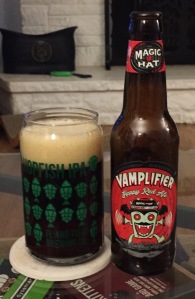 Trivia: According to the brewery website, “AN UNSTOPPABLE ANTHEM OF ALE. Summoned by a shift in seasons, the Vamplifier appears with devious deeds in mind. Baring its sonic sound waves, it swoops down and crashes into glasses, striking palates with a big hop bite. Tastes are forever transformed, and the Vamplifier’s power increases with each sip while the sounds of soul-pleasing sighs fill the cooling skies.”

Random: I’ve never been into vampire movies. I haven’t ever found one that I really liked, except “Interview With The Vampire.”

The beer poured with a two finger, thick, light brown head. It dissipated slowly and left a lot of lacing on the glass. The body was a clear, dark brown with high carbonation visible. The nose was hoppier than expected with pine sap and then went into malt. The malt was sweet with caramel and hazelnuts. The taste came across as more grassy than piney with lemon pith. There was also some nutty malt as well. It had a medium body with moderate carbonation. The finish was quick with grass clippings. A bottle of this was $2.59 ($.22 per ounce). I thought this beer was a bit boring. It needed some more hops for my liking and balance with the malt.