Val and I are watching a marathon of “Say Yes To The Dress.” One couple wanted to get married in the water with dolphins. That would definitely be an interesting wedding. Anyways, let’s get to the beer. 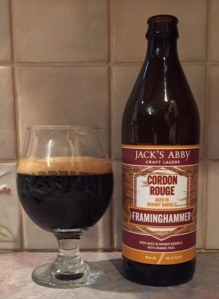 Trivia: According to the brewery website, “Big, bold, black, and aged in bourbon barrels with orange peel. The lengthy conditioning period in the barrels creates a silky smooth chocolatey mouth feel enhanced by the use of oats and brown sugar during the brew process. Noticeable sweetness gets balanced by roasted malt and hop bitterness. Additional flavors include bourbon, oak, and spice.”

Random: This beer comes in at 45 IBUs.

This beer poured with half a finger of tan head. It went away quickly and left no lacing on the glass, but did leave a small crown on top. The body was black with no visible carbonation. The nose had notes of cigar ash and red wine. I didn’t pick up any of the orange peel. There was also some smoke and roasted malt. The taste had a lot of leather and tobacco. It quickly went into red grapes, licorice and smoke. There was a slight note of orange peel. It had a thick and syrupy body that was a bit overwhelming with apparent alcohol. There was no carbonation to cut it either. The finish was syrupy with orange and bourbon. This was yet another beer gift, so no word on price, but this was my least favorite of the Framinghammer series. I wouldn’t rush to have it again.