Today is my wedding day! I’m sure I’ll be posting a lot more about the planning since I post about 4-5 months in advance. But, When we decided on the venue, we picked some place historic with a lot of charm out in Pennsylvania. They also said that we could choose the beers that we wanted and specifically asked them not to serve Yuengling because of their stance on gay rights. Apparently it’s not uncommon to ask venues to pull that beer. I was on the search for a beer that was low in ABV but super-flavorful that we could serve. Spoiler alert: this wasn’t the beer. 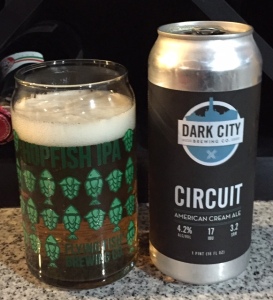 Random: This beer came in at 11 IBUs.

This beer poured with half a finger of pure white head. It was loose and dissipated quickly and left no lacing on the glass. The body was a clear, straw yellow color with moderate carbonation visible. The nose had grain, cream and vanilla. I didn’t pick up much else. The taste was clear and very light. It had notes of cream, grain and some pear skins. The body was almost too heavy for the style with not enough carbonation. The finish was instant with pear skins and grain. A pounder can of this was $2.83, which came to $.18 per ounce. This beer just missed the mark for me. It was too heavy and it needed a bit more flavor. I wouldn’t have this one again.