Two cream ales in a row! This was a collaboration beer with Funky Buddha out of Florida, so let’s see how it was. 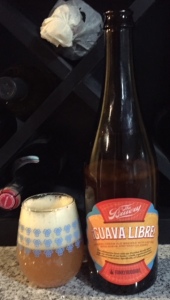 Trivia: According to the brewery website, “This sensory getaway transports you to a corner bodega with our friends at Funky Buddha in South Florida to recreate the flavors you’d find in a Cuban guava pastry. Championing the big, bold flavors that both of our breweries are known for, we brewed an imperial cream ale, adding lactose and vanilla to impart sweet, custard-like ribbons, and guava for filling its conceptual authenticity. It’s a collaboration that’s equal parts inspiration and admiration.”

Random: They recommend pairing this beer with shrimp empanadas.

The beer poured with a one finger, white head. It dissipated quickly with some lacing left on the glass and a small crown. The body was super cloudy and bright yellow in color with lots of carbonation visible. The nose was filled with guava and lactose. I was pleasantly surprised that it didn’t have any extract taste. It also had a light malt characteristic. The taste was sweet with guava, but quickly taken over by lactose and vanilla. It also had a bready characteristic to it. It wasn’t nearly as bright as the nose, but still was solid. The body was medium thickness with moderate carbonation. It had a quick finish with vanilla. A bottle of this was $14.99, which came to $.68 per ounce. I enjoyed this beer, but it needed more guava in the taste and it was definitely a little too expensive, but what Bruery beer isn’t.