This beer is one that I tried at Bainbridge Street Ale House. Val and I ended up there a lot because the place that we had our engagement rings and wedding bands made was across the street. We had a lot of issues getting them made, especially because the first try at the wedding bands resulted in my band not fitting around my engagement ring right, so we had to pick up my band on the Thursday before the wedding. But, it all worked out in the end. 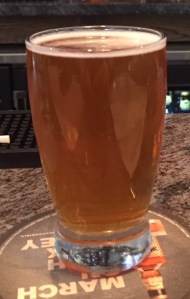 Trivia: According to the brewery website, “Crazy Navel is a blend of sour wheat and blond ales aged in oak wine barrels for 14 months with fresh orange zest. Using both Cara Cara and Heirloom varietals, Crazy Navel captures the essence of the navel orange balanced with a refreshingly tart and dry base beer.”

Random: This was on my list of beers to try for awhile.

The beer poured with a quarter finger of white head that dissipated almost instantly. The body was a hazy orange with no carbonation visible. The nose had a certain tartness to it, along with fresh orange segments and orange zest. The taste started with white vinegar along with orange zest. It had a certain sweetness at the end from the oranges. The alcohol did not make an appearance on the beer. The body was on the lighter side with high carbonation. It had a quick finish with orange. This beer was pretty good, but was on the super expensive side, as seems to be with all Cascade beers. This was worth a shot.