The day that we were flying back from Colorado happened to be the day of a snowstorm. We managed to have a four hour delay and got to know Denver airport really well. We both ended up doing a lot of work at the airport, but stopped to have dinner before we flew home. 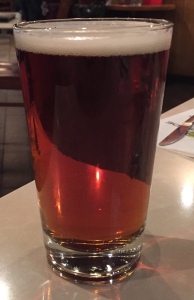 Trivia: According to the brewery website, “BRITISH CRYSTAL AND CHOCOLATE MALT, PERLE AND NUGGET HOPS. 90 Shilling is our smooth and complex flagship beer. A medium-bodied amber ale with a distinct burnished copper color and a deeply pleasant aroma. The name 90 Shilling comes from the Scottish method of taxing beer. Only the highest quality beers were taxed 90 Shillings. We think you’ll find this original ale brilliantly refreshing, and worth every Shilling.”

The beer poured with a half a finger of white head. It dissipated quickly and left a moderate amount of lacing on the glass. The body was perfectly clear and mahogany in color. The nose started with some herbal notes and quickly transitioned into biscuity and caramel malt. It had a slight nuttiness to it as well. The taste was very similar to the nose, except the malt came through first. It had the same caramel and nutty notes, but also had a slight note of clove. Some herbal hops came through as well. The body was on the thicker side with lots of carbonation. The finish was lengthy with caramel malt and cloves. I enjoyed this beer and would definitely have it again if it received distribution to Jersey.