This was the second beer that I had at the brewery. 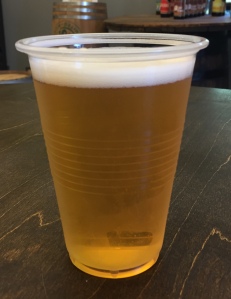 Trivia: According to the brewery website, “You don’t have to be in a dead end job to feel like you aren’t going anywhere. That’s the way we felt before River Horse. We were finance geeks living in a world without soul. Grinding it out everyday for a fee, wearing suits and kissing butt. Then this brewery chose us…she forced us to ask ourselves, “Is this desk job really how I pictured my life?” We answered that question by taking over River Horse in 2007 and have not looked back. We may not end up as the greatest success story on earth, but at least we had the balls to try. Sometimes, for better or worse, your dreams get the best of you. Just remember, it’s a big world out there and cubicles don’t have doors, so you can walk out anytime. Come see us when you can. We are located in Ewing, NJ. Thanks for supporting the cause. Hope you enjoy the beer…”

Random: There are no Beer Advocate entries for this beer.

The beer poured with a one finger, white head. It dissipated quickly and left no lacing on the plastic cup. The body was slightly cloudy and I expected more cloudiness from the beer. There was some carbonation visible. The nose had wheat and a touch of Grains of Paradise. There was some citrus as well. The taste had a lot of wheat along with some lemon and not much else. The body was light with a lot of carbonation. It had a quick finish with wheat. I paid $3 for the beer, which came to $.25 per ounce. I thought this beer was alright, but nothing amazing.