Tonight’s beer is one that I’ve had my eye on for a long time and finally pulled the trigger. 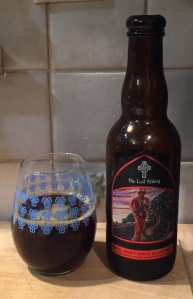 Trivia: According to the brewery website, “They were told not to eat the fruit from the apple tree. It was off limits and the fruit was forbidden. They were tempted by the serpent and made a choice to eat from the tree. Their actions were not preordained but rather the actions of beings with free will. We have all been given free will and it is this notion of free will that affords each of us the opportunity to make choices in our lives. At every fork in the road, there are signs marking the struggle of Good vs. Evil. The Lost Abbey was imagined as part of a crusade in this ongoing story of Good vs. Evil beer. Everywhere we turn these days, there is a battle being waged between those who make good beer and those who make evil beer (bad beers). But, how did we get here? Why us? Why these beers? Do you want to join our crusade?A few years and beers ago, Vince Marsaglia (one of our co-founders and half of the family duo that owns Pizza Port) was inspired by the numerous Abbey Style beers that he tasted and dreamed up a brewery project that produced a range of beers produced with a nod to the monastic brewing traditions of Belgium. As Vince imagined it, this brewery had no actual Abbey property involved, making it ‘lost’ from the very beginning.”

Random: This beer was originally called “Track 11” from their Box Set Series.

The beer poured with a wispy, less than half a finger, tan colored head. It dissipated quickly and left no lacing on the glass. The body was a murky, dark brown color with no visible carbonation. The nose was big. It had a lot of bourbon and oak up front with some caramel and a touch of peach liqueur. The taste also had a lot of bourbon and vanilla up front. Booze made an appearance as well, but it wasn’t overwhelming. There was a touch of peach and black tea. It had a sweet, caramel note as well. The body was thick and chewy with light carbonation. The finish was sticky sweet and lengthy. I picked this bottle up for $16.99, which came to $1.32 per ounce. It was definitely an expensive beer, but worth every penny. I forgot how much I love beers from The Lost Abbey.