A few weeks back, Val and I went down the shore to meet my sister and parents for dinner. We went a few hours early to check out some of the breweries in the area. We went to Bradley Brew Project and Beach Haus. I really enjoyed the beers at Bradley Brew Project. The space wasn’t huge, but they had a nice variety of beer styles. Beach Haus was a huge space and really well-done. I could see this place being mobbed in the Summer. It’s two levels, the bottom level having the retail and swag section and upstairs having the tasting room with windows into the brewery. Unfortunately, I wasn’t a huge fan of the beers. This was a beer that I tried at a local restaurant while grabbing some snacks. 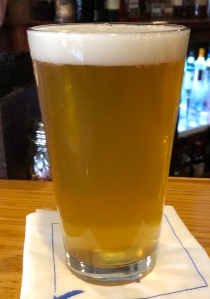 Trivia: According to the brewery website, “A light bodied, European style lager featuring Czech and German hops and the highest quality, imported malts.”

Random: This beer comes in at 24 IBUs.

This beer poured with half a finger of pure white head. It was relatively thick and dissipated slowly. There was a hint of lacing left on the glass. The body was yellow and cloudy with light carbonation visible. The nose had some wheat and lemon. The taste had some lemon rind and pilsner malt and not much else. It had a light body, but was definitely under carbonated. The finish was quick with pilsner malt. This was a relatively unoffensive beer, it just needed a lot more carbonation.