Mangoes are one of my favorite fruits. I work by a Wawa and they sell a package of ready to eat mango that I purchase quite often. 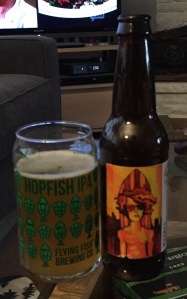 Trivia: According to the brewery website, “American-Style Wheat Beers are similar in malt bill to their German Weizen cousins, but exhibit much less yeast characteristic. These may be filtered or unfiltered and exhibit low to medium hop bitterness and aroma. Inspired behind artwork: This character represents the stereotypical surfer guy relaxing on the beach, with shaggy hair and no shirt. Instead of a surfboard in the background we actually put a paddleboard because it has become a very popular sport by the Bell Isle Detroit River area. The background also includes Detroit’s skyline. We included colors like salmon, pink, orange and yellow to represent the fresh mango puree that is added to the boil in the brewing process.”

Random: I love all of the Real Housewives series. It’s complete fluff, but it’s the best to watch after work.

The beer poured with a half a finger of white head that dissipated quickly and left no lacing on the glass. The body was a hazy, lemon yellow with moderate carbonation visible. The nose had a combination of mango and lemon juice along with mango flesh. The taste had notes of mango juice and mango flesh and wheat with a weird twang at the end. The body was heavier than expected with light carbonation. It had a lengthy finish with mango juice. The bottle was $1.83 and came to $.15 per ounce. This beer wasn’t complicated, but satisfied me. I would have this one again.

It’s almost the new year. This means that end of quarter is almost here. Supposedly, it’s going to be the busiest end of quarter that we’ve ever seen, which will mean lots of early mornings and late nights. Their volume keeps going up because they are coming out with new brands. I guess we’ll see. Tonight’s selection is a beer that isn’t available in Jersey and I know absolutely nothing about.

Trivia: According to the brewery website, “HopApeel is a frontal assault on the American IPA style that features not only the classic American Cascade and Chinook hops, but two of the new ‘Super Cascade’ varieties in both the kettle and in the dry hop.”

Random: I really like the Ego set of lawn tools. I have the leaf blower, weed whacker and lawn mower.

This beer poured with a one finger, pure white head. It dissipated very quickly and left very little lacing on the glass. It did leave a crown on top of the cloudy, dark amber body. There was moderate carbonation visible. The nose was not what I expected. It smelled like old wood, orange furniture cleaner and nutty, sweet malt. The taste started with the same orange furniture cleaner note that was off-putting. Malt quickly came after, imparting a lot of sweetness and nuttiness. The alcohol was hidden. The body had some thickness to it and it had light carbonation. The finish was lengthy with the same orange cleaner note that I wasn’t a fan of. A single can was $2.25, which came to $.14 per ounce. This beer was a miss for me. The flavors weren’t to my taste and it had too much malt.