So, I have this love-hate relationship with my local bar. It’s conveniently located about 5 minutes down the road from me, has some decent craft beer (albeit not a huge selection) and big televisions. The downside of the place? The food is mediocre at best and the crowd is usually…colorful. But, Katie and I ended up there anyway last night. Since it’s usually late when we go out, I guess I shouldn’t complain. It just has so much potential if they fixed a few things. Moore’s Tavern is owned by the same people who own the other bar I go to, Jack Baker’s American Grille (and they both have identical menus…down to the font on them). The last couple of times I’ve been there, they have never had any of the beers that I ask for. They’re either on order or they just ran out when I got there. But, I guess it was my lucky day since they had this brew which I hadn’t reviewed yet. 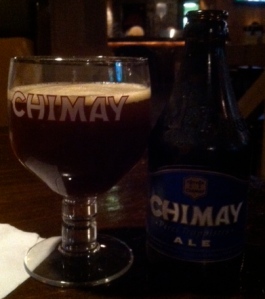 Trivia: According to wikipedia.com, “Chimay Bleue (Blue), 9% abv darker ale. In the 75 cl bottle, it is known as Grande Réserve. This copper-brown beer has a light creamy head and a slightly bitter taste. Considered to be the ‘classic’ Chimay ale, it exhibits a considerable depth of fruity, peppery character.”

Random: I love the Chimay chalice that it was served with. I have a certain affinity for sexy glassware.

I poured this brew out of the bottle into the waiting chalice. Another complaint that I have about this bar is the fact that they keep the beers way too cold. I was waiting for ice chips to fall out of the bottle on this one. It came out with half a finger of off white head that dissipated quickly and left no lacing on the glass. The body was a cloudy, brown color with lots of visible, active carbonation. The nose had a lot of sweet and dark fruit on it. I really enjoyed the notes of fig and dates with a bit of yeast as well. The taste was just as enjoyable as the nose. It had sweet dates, figs, candi sugar and some Belgian yeast. The booze was really well hidden and didn’t even come out on the finish. The body was on the thicker side with prickly carbonation. The finish was relatively quick with sweetness. I really enjoyed this beer. Everything worked really well for it and yet another brew from the Chimay family that I loved. I would definitely have this one again.

I kept thinking today was like Thursday. I feel like I’ve just been working like crazy, so I added some days onto my week. Unfortunately, it’s only Tuesday. I know that the rest of the week is going to be crazy, so I think a nice Belgian is in order. I guess it’s time to break out the Duvel glass…

Trivia: According to the Chimay website, “Named Cinq Cents in 75 cl (25.4 fl.oz.) bottles, this beer with its typical golden colour, its slightly hazy appearance and its fine head is especially characterised by its aroma which results from an agreeable combination of fresh hops and yeast. The beer’s flavour, as sensed in the mouth, comes from the smell of hops: above all it is the fruity notes of muscat and raisins that give this beer a particularly attractive aroma. The aroma complements the touch of bitterness. There is no acidity, but an after-bitterness which melts in the mouth. This top fermented Trappist beer, refermented in the bottle, is not pasteurised.”

Random: When I get home, especially after I’ve been to the gym, I have such a hard time picking out a brew to drink if I’m not craving something (like an IPA). I usually try to do “first-in, first-out,” but sometimes I’m just not in the mood for the next in line. This happens to be one of those days (Red Stripe was actually the next in line, but I just wasn’t feeling it). I’ll probably open the Red Stripe tomorrow.

This Trappist offering poured with a one-finger, pure white, fluffy head. The head complemented a cloudy orange body that presented with some moderate carbonation. The head dissipated at a steady pace and left some lacing on my Duvel glass. The nose had notes of bread, sweet golden fruits, citrus and a hint of clove. This definitely smells like a Belgian. I also got a slight hint of must as it warmed up. The taste had a lot going on. I first got malt, then some golden fruit, then a hint of citrus zest, finishing with a bit of clove. It took a bunch of sips to get all the different flavors that came through. Despite what may seem like too many flavors, they really all worked together making a really well-balanced tripel. This is also dangerously drinkable, with no real alcohol burn. It also wasn’t syrupy like I tend to find some Belgians. The finish lingered momentarily with that yeastiness I’ve come to expect from a tripel. Awesome brew…definitely would have again.

Today was a pretty good day. Classes went pretty quickly, as did work. I had a good day at the gym and now I’m home, watching a documentary on Sophie Scholl who was part of the White Rose resistance movement in Germany during WWII. I seriously love subtitled movies. I have no idea why, but I really do. Especially when they’re completely in German. I even relaxed on the couch and went through some catalogs. Tonight, I’m opening a beer I haven’t had in years. Let’s see how it fairs. 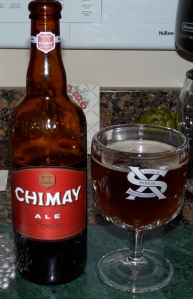 Trivia: According to the Chimay website, “First sold in 75 cl (25.4 fl.oz.) bottles, it is noted for its coppery colour which makes it particularly attractive. Topped with a creamy head, it gives off a light, fruity apricot aroma produced by the fermentation. The taste perceived in the mouth is a balance confirming the fruity nuances noticed in the fragrance. Its taste, which imparts a silky sensation to the tongue, is made refreshing by a light touch of bitterness. To the palate, the taster perceives a pleasant astringency which complements the flavour qualities of this beer very harmoniously. This top fermented Trappist beer, refermented in the bottle, is not pasteurised.”

Random: For some reason, I thought my Dad bought me Chimay Blue instead of Red. Oops. I guess I’ll have to buy that one myself.

The brew poured a cloudy chestnut-brown with a one finger white head into my Rogue goblet (I seriously love any chance to break these bad boys out). The head didn’t leave any lacing, but there was some serious visible carbonation going on. The nose presented with some notes of raisin, sweetness and a hint of booze. This smells like a Belgian, all the way. On the taste, the first thing that I get is way more carbonation than I remember. It’s not bad by any means, just unexpected. I also got more raisins and dark fruit, coupled with some yeasty flavors and malt sweetness. The finish lingers with a hint of yeast. This is still a great beer. I’m definitely going to enjoy finishing this bottle.