Tonight’s beer is a really unique one and I can’t remember the last time that I’ve had a braggot.

Trivia: According to the brewery website, “Inspired by artifacts discovered during archaeological digs in Taixi and a Changzikou tomb dating from the Late Shang/Western Zhou Dynasties circa 1600-722 bce, this a modern recreation of Chang. A stronger, drier herbal version of Li, a sweet, low abv rice- or millet-based “beer.” Rather than a strict recreation of a single dig site, we chose to make an amalgam because existing evidence shows a wide range of beverage types were produced… and the federal government decided that many of the ingredients and flavorings being used at the time are not currently legal to use in beer production. Of particular interest, these sites have some very early evidence of mold based sacchrificaton – China’s unique contribution to the production of alcoholic beverages. Taste profile is of peaches and lemon rind with fragrant aromas of tea, bubblegum, and sake followed by an onslaught of complex fruit, herbal, and floral character. Body is dry and effervescent with the warming alcohol dissipating quickly from the palate leaving one with the perception of nectar, honey, and perfumed rice.”

Random: Since I love Off Color branding, I had to look at their current swag while posting this and bought two shirts.

The beer poured with a one finger, relatively thick, white head. It went away quickly and left some lacing on the glass. The body was somewhat hazy and bright yellow with moderate carbonation. The nose was interesting. It started with yeast and transitioned into rice. Wildflower honey came through next with apricot and peach. The taste was just as interesting. I was shocked that on first sip, there was no alcohol burn at all. The same milled grain and rice was there along with honey and some honeycomb as well. I picked up apricot and date along with some fig jam. The body was on the medium side, which was surprising given the ABV of the beer. It had a lot of carbonation. The finish was sweet and sticky and hung around for awhile. I picked this beer up for $20, which came to $.91 per ounce, which is a bit pricey, but for something this unique, it was worth it.

Tonight’s selection is another beer from Davidson Brothers. As you can tell, I got a lot of them as a gift. Let’s crack this one open.

Trivia: According to the brewery website, “We bought our current building at 184 Glen Street in 1996. It was a great decision, but came with the kind of hard work you only find in old buildings. It was an all-hands-on-deck endeavor as we removed all the trash, junk, wiring, pipes and over 700 cubic yards of interior building materials from the 130-year-old building. Carpenters, plumbers, electricians, refrigeration specialists and more worked tirelessly for over 2 years to realize the vision we had for the space. Today it sits proudly in the center of a thriving downtown, something we always knew would happen. We look forward to continuing to create history here in the Exchange Street Plaza.”

Random: Both the cat and I can’t stop sneezing.

The beer poured with a half a finger of white head that dissipated slowly. It left some lacing on the glass. The body was a hazy mahogany with light carbonation visible and a lot of floating material. The nose had sharp alcohol, pine, and dirt. The taste was slightly smoother with pine, some currants, dirt and a lot of alcohol that finished with brown bread crust. It was quite earthy. The body was thinner than expected with moderate carbonation. The finish was quick and earthy with dirt. The beer was free, since this was a gift, but I just didn’t enjoy this beer at all. Although I give the brewery a lot of credit for making a style that isn’t all that popular, this was a miss.

Val picked up this beer for me a week or so ago. This is only the third braggot that I’ve had. I feel like the style is picking up some popularity and is more easily available than a few years ago. I had my first almost exactly a year ago when Rogue put one out (Rogue Marionberry Braggot). Let’s see how this one fared.

Trivia: According to the brewery website, “Much like beer, honey has played a role in culture throughout history. It was only a matter of time before someone would combine two ancient libations, beer and mead, into a style known as a Braggot. Introducing Big Eddy Royal Nektar. Brewed with pale two-row barley and malted rye with local cranberry blossom honey, this beer will make anyone feel like royalty. ”

Random: I think that Leine’s Big Eddy series is pretty solid and a nice change from their shandies.

This beer poured with a half a finger of white head that dissipated quickly and left no lacing. The body was a light orange with little carbonation. The nose had syrupy, honey sweetness, alcohol and green apple. The taste had a lot of honey and rye. Apricot and green apple came through with booze and white pepper. The body was medium thickness and low carbonation. It had a long finish with hot booze and honey sweetness. This was $2.50 for the bottle, which broke down to $.21 cents per ounce, which is expensive for a Leinenkugel’s beer, no doubt. But it was still a nice beer that had some good flavor, but you definitely can’t have more than one in a sitting.

It’s Sunday morning, which means that the cat woke me up early to feed him and the other half is still asleep. I’m watching a DVD about a gang in San Diego and updating the blog. Let’s see how this one was.

Trivia: According to the brewery website, “Exit 3 is the gateway to a lot of farmland, so we’re using one the state’s favorite crops– blueberries. Braggot is an ancient style– written about since the 12th century. This Braggot features local blueberries and honey, a very limited amount of hops and is fermented with Belgian-style yeast. The result is a straw colored beer with blueberry highlights. On the first sip you will note a light sweetness along with citrus notes followed by a well rounded malt character. The beer has a medium full body.”

Random: Since the cat has been fed, obviously he went right back to sleep.

This beer poured with a one finger, white head that dissipated slowly with some lacing left on the glass. The body was a slightly cloudy, dark orange color with moderate carbonation. The nose was really sweet with pronounced honey and a touch of blueberry, not nearly as strong as I expected. The taste also had honey sweetness and the hot booze. The blueberry came through, but was not nearly strong enough, making the taste completely one-note and cloyingly sweet. Not shockingly, the body was thick with light carbonation and it had a long and sweet finish with alcohol. This beer was also on sale at Canal’s for $8.99, which broke down to $.41 per ounce. This beer was just a total letdown for me and probably the worst so far of the exit series. I wouldn’t have this one again.

This was a beer that the other half picked up to try. Little did she know that it was one of the few beers styles that I’ve never reviewed before. I’ve been searching for a beer of the style for years, but not many breweries put out a braggot. Leave it to Rogue. Anyways, after she tried it (and didn’t like it at all), I tried a glass of it to see what I thought of it and of the style. 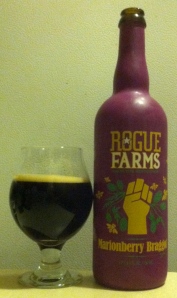 Trivia: According to the brewery website, “Marionberry Braggot combines Rogue Farms Marionberries, which we grow and hand-pick ourselves, with our Hopyard Honey, collected from 119 colonies of Rogue Farms honeybees who feed off wildflower nectar around the farm. It’s a true taste of the terroir of the Wigrich Appellation.”

Random: I would definitely be interested to try more beers of this style to see if this beer was a good representation of it.

This brew poured with a half a finger of tan head that dissipated quickly and left no lacing on the glass. The body was a very dark brown, bordering on black. It had moderate carbonation visible. The nose had a lot of burnt brown sugar, caramel malt and a touch of berry, but it wasn’t sweet. It just provided a touch of brightness. The taste was very similar to the nose. There were some pine needles and caramel malt with molasses and some toffee. There was also some booze present as well. The body was thick with moderate carbonation. It had a long finish with pine needles and brown sugar. This was only an alright beer and nothing I would rush back to have again.