I managed to do something today that I haven’t done in forever. I slept until noon. When I woke up, I felt a bit guilty because I thought I was wasting the day, but I must have been really, really tired. I think it’s been at least a year since I slept this late. Anyways, I picked up this brew last week. Let’s see how it went down.

Random: We’re watching “House Hunters: Where Are They Now?” It could be my new favorite version of the show.

This brew poured with a two and a half finger tan head that was slow to dissipated and left slight lacing on the pint glass. The body was a dark brown color with moderate carbonation visible. The nose was really fragrant with notes of vanilla, dark chocolate and milk. There was also some cocoa powder to it. The taste was really impressive. I got strong notes of dark chocolate, coupled with cocoa powder and malted milk balls. There was a bit of sweetness and cream to it as well. Vanilla flavors came out as the beer warmed. The body was really creamy and medium thick with moderate carbonation which really complemented the beer. There was a very slight alcohol burn to it at the end as well. The finish was long with vanilla and cocoa powder. I really enjoyed this brew. It was really flavorful and really smooth. If you see it at your local beer store, it’s definitely worth a try.

I’ve finally got the blog a little bit updated. This is actually the last one that I have to update, which is nice. This is a brew that Katie picked up for me. I haven’t been floored by beers from this brewery, but I absolutely love their ad campaign (specifically targeted against macro breweries). I’ve never had any of their offerings in a can, so I’m curious to see how their summer seasonal is.

Trivia: According to the brewery website, “Breck Brew’s SummerBright is the result. The craftsman’s touch combines white wheat, two row pale and munich malt with the pacific northwest’s most intriguing hops to create a bright, clean ale ideal for picnicking, evenings on the screen porch and enjoying the whims of the summer breeze.”

Random: I’ve watched about 5 episodes of Gangland today. I forgot how much I love this show.

This brew poured with a thick, two finger white head that dissipated slowly and left limited lacing. The body was a cloudy yellow color with light carbonation visible throughout. The nose was light lemon and some wheat. It was very mild, even for the style. The taste was lemon with some mandarin orange and wheat. It had a lot of flavors that were reminiscent of summer, but they came off artificial. The body was on the thicker side of the style with light carbonation. It finished quickly without any special flavors. It was definitely a drinkable brew, but fell short for me on a bunch of different levels. It was only ok for me.

Yet another review that has been sitting in my notebook, catching dust. This was one from the bock six-pack that I got, although it was slightly out of season. I haven’t tried a lot of Breckenridge brews, so I was hoping that I would really enjoy this one.

Trivia: According to the brewery website, “Bottom fermented at colder temperatures for a smooth yet assertive character.”

Random: I do like the name of this one. The artwork on the label is pretty cool too.

This brew poured with a one finger, white head that dissipated at a moderate pace, but no lacing was left on the glass. The body was a clear, chestnut color with lots of active carbonation. The nose was buttery and nutty. The taste was more of the same notes that were apparent in the nose. I got nuts, toffee and some buttery biscuit malt. The body was medium thickness and had a generous amount of carbonation. The taste also had a mineral quality to it. The alcohol wasn’t a big component to this brew. The finish was pretty quick with some malt. This wasn’t the best bock that I’ve had. It was alright, not great. I’d have it again. Final impression: it was a little simplistic and too thin.

Another brew for the night. MLB Extra Innings is having a free preview, so I got to catch some of the Dodgers-Pirates game. I was really in baseball withdrawal, so at this point, I’ll still watch anything. Katie didn’t seem to have the same appreciation for it, but at least she’s trying. It’s quite adorable. So, here’s a beer that I got the chance to try at AC Beer Fest and really enjoyed. Let’s see how a full bottle goes down. 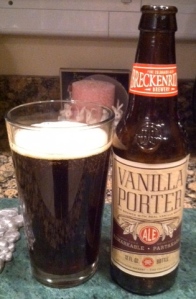 Trivia: According to the brewery website, “Deep in the jungles of Papua New Guinea and Madagascar grows the perfect ingredient for an extraordinary Porter brewed in Colorado. Breckenridge Brewery’s Vanilla Porter. An ale that has all the chocolate and roasted nut flavor of a classic Porter, with an enigmatic surprise thrown in for good measure.”

Random: Even more shocking, my sister liked this one too!

This brew poured with a half a finger of white head that dissipated almost instantly. It left no lacing on the glass. The body was a dark cocoa color with a clear body and moderate carbonation. The nose had vanilla and roasted malts. I didn’t get much else to it. The taste was a lot of vanilla and the roasted malts were more tame on the taste than the nose. It almost tasted like a vanilla coke.The body was the heavier side of porter with light carbonation. The finish lingered with a bit of vanilla and cocoa. There was no noticeable alcohol, which was to be expected. It was a very nice beer with slightly different flavors than the normal porter. I’d have it again.

I’m exhausted tonight. I think the hike from yesterday caught up to me, because I am sore and tired. Plus, work has been crazy. Usually, the summer is the slow time for my job. This year? I think the summer is the busiest that we’ve been all year. It makes the day go quickly, but it is definitely draining. So, tonight’s brew is from a brewery that I’ve seen around but only had a few beers from. I’m all for hoppy, so lets see how this goes.

Trivia: According to the brewery website, “Hoppy? Brother, 471 IPA redefines hoppy. 471 is a small batch, limited edition ale that was created by our Brewmaster to separate the weak from the strong. 471 is a double IPA, that combines Pale, Munich, Caramel-30, Carapils and Torrified Wheat malts, with Chinook, Centennial, Simcoe and Fuggles hops. It has a big sweet mouthfeel, followed by more hoppiness than you’ve ever had at one time. Enjoy.”

Random: This brew just earned me the Level 3 badge of “I Believe in IPA!” on untappd.

This brew poured with a slightly hazy orange body that had moderate visible carbonation. The head on the beer was a healthy three finger one and fluffy. It left some crazy lacing on my Flying Fish tulip glass. The nose was probably one of the best I’ve smelled on a double IPA lately. It was filled with lots of piney hops with a hint of citrus on the end. The taste surprised me. I expected a total hop bomb from the nose, but it was way more balanced than I expected. The first flavors I got were the obvious pine and citrus hops. It was then followed up by an almost honey-like sweetness which transitioned into a bit of floral bitterness for the finish. The 9.2% ABV only makes an appearance towards the end of the sip. The thickness of the brew is medium with moderate carbonation. I really enjoyed this beer, although it wasn’t the greatest DIPA I’ve ever had. With that being said, it really held its own and was easy to drink. Definitely worth a shot.

I hate the first day of work after a long weekend. I had a full day of work and then headed off to the gym. I had a decent workout and got in about 30 minutes of cardio in. Not a bad day. The best way to cap off a day like this? Pop open a brew… 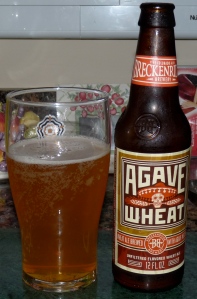 Trivia: According to wikipedia, “Agave nectar (also called agave syrup) is a sweetener commercially produced in Mexico and South Africa from several species of agave, including the Blue Agave (Agave tequilana), Salmiana Agave (Agave salmiana), Green Agave, Grey Agave, Thorny Agave, and Rainbow Agave. Agave nectar is sweeter than honey, though less viscous. The majority of agave nectar around the world comes from Jalisco in Mexico and the Eastern Cape Province in South Africa. However, in Mexico, in addition to coming from Jalisco, the product is also produced in the states of Michoacán, Guanajuato and Tamaulipas.”

Random: I find it interesting that this is classified as a herbed/spiced beer. It seems like there is a lot of variability in this style…

This brew poured a hazy golden-yellow with a barely there white head. The head dissipated to nothing almost instantly and didn’t leave any sort of lacing on the glass. I struggled to see some moderate carbonation on the body. The nose was definitely interesting…I got definite sweetness that reminded me a bit of honey. I also got a hint of…apple juice? Odd…anyways, the first sip is definitely crisp with a hint of sweetness. I’m going to take a wild guess on this one and say that it was the agave nectar that was added. I also got some very mild citrus on this and not much else. This was definitely a mild beer and the body was very thin. This could have definitely used a little bit more carbonation. Honestly, there just wasn’t much to this beer. I guess I just thought it would have a little more flavor than it did. This is just an eh beer for me. I wouldn’t have it again.