We went to lunch at an Irish pub down in Tampa. They actually had a place a few storefronts down called “World of Beer.” Yes, I went in. No, I didn’t try anything. I looked and there were very few beers they had that I couldn’t get up in Jersey. They had a lot of Rogue offerings though. Anyways, this was one that I had with my sandwich. 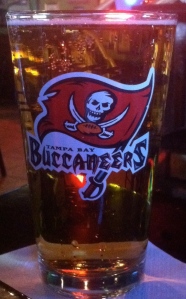 Trivia: According to the brewery website, “Strongbow is a crisp, premium imported cider from the U.K. which delivers maximum refreshment in an authentic, traditional English recipe. At the heart of every successful brand is a clear message. Strongbow is built on the promise of maximum refreshment of body and mind – through this all the characteristics of the brand are connected. With its clean refreshing taste and striking livery, Strongbow appeals to import beer drinkers everywhere.”

This one poured with a barely there white head that dissipated quickly. It left no lacing on the glass. The body was a clear, dark yellow color with moderate carbonation visible. The nose was obviously apples. But, they were more dry than your typical cider. The taste was also, shockingly, apples. But, this was definitely a dry cider and the sweetness didn’t overwhelm the palate. This was definitely reminiscent of other English/Irish dry ciders that I’ve quaffed. The finish was relatively quick and had a hint of sweetness at the end. The body was heavy enough with appropriate carbonation. I would definitely have this again. It wasn’t my favorite dry cider, but it was definitely enjoyable.