I can’t wait until baseball is back. I love hockey, but I enjoy baseball season because it lasts so long and there’s always a good game to watch. This beer is one that I was hoping would be a good selection once the weather gets warm. 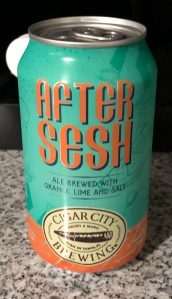 Trivia: According to the brewery website, “Skatepark of Tampa and Cigar City Brewing, two Florida originals, have collaborated on this crisp beer with notes of lime, orange and salt that can be enjoyed after a skate session or anytime you’re with friends. A portion of the proceeds from sales of this beer will go toward Boards for Bros, a nonprofit dedicated to rebuilding and distributing skateboarding equipment to underserved youth, empowering them to acquire important life skills.”

Random: I love when the weather is cold, but I love a good hot-weather beer.

The beer poured with about a finger of head and dissipated almost instantly. It left no lacing on the glass. The body was clear and golden-yellow in color. There was a lot of carbonation visible. The nose had some citrus and flowers with some wheat as well. The taste had the same wheat that was apparent in the nose and it went into floral notes with some honey. I was hoping for a bit more lime and salt, but the floral notes overtook. After a few sips, I picked up orange segments. The body was light and crisp with a lot of carbonation. It had a quick finish with orange and wheat. This was an easy drinker, but I wish it had more depth. I wouldn’t rush back to have it again.

I’m still trying to get through my backlog of posts that date back to October, so this was in season when I drank it. 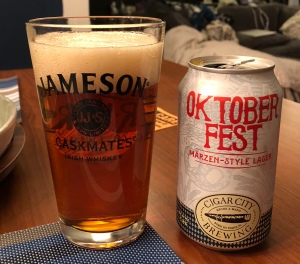 Trivia: According to the brewery website, “In Florida the changing of seasons is decidedly more subtle than in most other places. Palm fronds rarely turn brilliant red and orange the way leaves do in the rest of the country, and for Floridians sweaters exist only as rumor. We at Cigar City rely heavily on our seasonal beers to mark the passing of each month and few beers are better at heralding the arrival of autumn than our Oktoberfest Lager. Our Festbier nods firmly toward the style’s history with it’s amber color, bready malt complexity and restrained hop flavor and bitterness. At the heart of this beer is a malt bill of six different German malt varieties, including a generous helping of Munich malt. After adding Hallertauer Mittlefruh hops we ferment the beer with an authentic Bavarian lager yeast, resulting in a clean, dry and complex lager that’s at once intriguing and drinkable. As the temperature drops to the frosty mid-80’s and the snowbirds return to their cool-weather roosts, we can’t think of a better beer than Cigar City Oktoberfest to compliment the onset of autumn. Pour yourself a liter stein and let out a hearty prost!”

Random: This is a special release from the brewery.

This beer poured with a loose, two finger, slightly off white head. It dissipated quickly and left little lacing on the glass. The body was a clear, bright, orange-brown with moderate visible carbonation. The nose had some lightly toasted malts with a touch of caramel and floral hops. The taste was much of the same. It had a brown bread note along with some sweet caramel and toffee malts. The floral hop note was there, but was in the background. The body was light and had a lot of carbonation. It had a quick finish with caramel malt. A can of this was $1.83, which came to $.15 per ounce. This was a decent beer, but nothing mind-blowing. I’m glad I gave it a shot.

I love Cigar City beers and this one sounded right up my alley. Let’s see how it was. 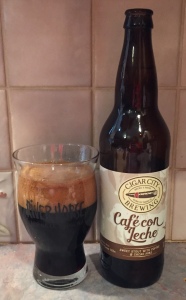 Trivia: According to the brewery website, “Sweet, roasty and always invigorating, traditional Latin American cafe con leche coffee can be found nearly everywhere in our hometown of Tampa, Florida and serves as the inspiration for our Cafe Con Leche Sweet Stout. The beer is made with bold, strong coffee beans to emulate the most characterful Cuban espresso and lactose, a milk sugar that adds sweetness, body and flavors reminscent of scalded milk. Despite it’s assertive flavors and full body, our sweet stout is deceptively low in alcohol, making it the perfect accompaniment to a late-morning plate of eggs, bacon and tostatas.”

Random: I never thought about pairing a beer with bacon and eggs, but I think that needs to be rectified.

The beer poured with a three finger, light brown head. It dissipated slowly and left some lacing on the glass. The body was a dark brown that was almost black. I couldn’t see any carbonation due to the color. The nose was filled with roasted malts and chocolate. I picked up espresso and lactose next. The taste started with a significant lactose sweetness. It quickly transitioned into milk chocolate and espresso. Smoke came through at the end of the sip. The body was on the medium side with moderate carbonation. It had a lengthy finish with lactose. I picked this up for $12.99, which came to $.59 per ounce. I thought this beer was good, but definitely on the more expensive side.

I love pumpkin beers and this beer is one that I’ve tried to find for years. I saw it on a shelf awhile back and grabbed the last bottle. Let’s crack it open. 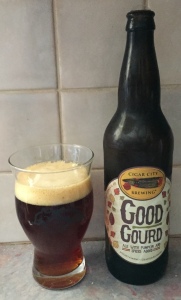 Trivia: According to the brewery website, “A liquid monument to the glory of the pumpkin, the most noble of all the gourds, this Imperial Pumpkin Ale is brewed with cinnamon, Jamaican allspice, Zanzibar cloves, nutmeg and vanilla to emulate the flavors of a decadent, piquant pumpkin pie. The gourd is good, indeed.”

Random: This beer is a special release from Cigar City.

The beer poured with a two finger, tan-colored head. It was thick and took awhile to dissipate. It left a lot of lacing on the glass. The body was a mahogany brown and clear with moderate carbonation visible. The nose was very fragrant. It started with pumpkin pie, cinnamon, nutmeg and lots of vanilla extract. Ginger and allspice came through next. There was a scent of booze along with ginger. The taste was just a bigger version of the nose. It started with lots of pumpkin pie. The spices were bold with cinnamon, nutmeg, allspice and clove. It also had a lot of ginger and vanilla. The booze was apparent on this beer, for sure. There was also caramel and toffee. The body was thick and sticky with light carbonation. The finish was lengthy and sticky. I thought this beer was good, but definitely a slow sipper because of the sweetness.

I remember when it was difficult to find Cigar City in the area. Now that I’m spoiled because we get distribution, I found this beer hanging out on the shelf. Let’s see how it was. 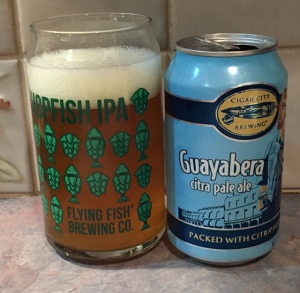 Trivia: According to the brewery website, “Traditional throughout Latin America, the guayabera shirt combines style, functionality, form and tradition in it’s four-pocketed design. We at Cigar City feel the same reverence and appreciation for the guayabera that we do for the Citra hop varietal, an ingredient that imparts notes of tangerine, lime and berries to this traditional American Pale Ale. The exclusive use of Citra hops in this beer creates a flavor that’s at once unique and recognizable, while it’s dry, crisp character and moderate alcohol make it as refreshing and functional as a crisp linen guayabera.”

Random: This is a regular release from Cigar City.

The beer poured with a two finger, cream-colored head. It dissipated at a moderate pace and left a small crown on top of the cloudy, orange body. There was only some carbonation visible. The nose had a lot of citrus, specifically pomelo, grapefruit and Mandarin orange. The taste was more of the same. It had a huge amount of citrus with orange, pomelo and lemon. It also had a touch of tropical flavor with pineapple. The body was on the lighter side with lots of carbonation. The finish was quick with citrus. This was $6 per can, which came to $.17 per ounce. I thought this was an easy drinker that I would have again.

Tonight’s selection is a beer that I’ve been waiting years to try. Since Philadelphia gets Cigar City distribution, it made sense that they finally got this beer. When I saw it as a selection at the bar, I knew I had to review it. 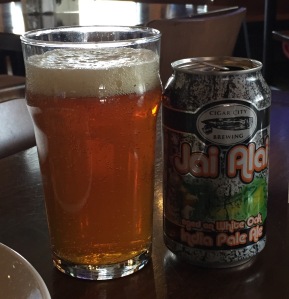 Trivia: According to the brewery website, “A truly unique India Pale Ale, this iteration of our Jai Alai IPA boasts the addition of white oak spirals to impart sleek notes of vanilla, coconut and a touch of dill to Jai Alai’s bold citrus and caramel character. The oak also serves to temper the bitterness in the 70 IBU base beer while oak tannins elegantly dry the beer’s body to create a unique drinking experience that still remains true to Jai Alai’s unique qualities.”

Random: I got an entire collection of hot sauce for Christmas. I should be stocked up for at least another six months.

The brew poured with half a finger of pure white head. It dissipated slowly and left some lacing on the glass. The body was slight hazy and bright orange in color. It had a lot of carbonation visible. The nose started with warm vanilla, oak and piney hops. There was toasted wood as well. The taste started with a lot of cedar and oak up front with vanilla. It quickly transitioned into pine sap and hops. There was some malt at the end of the sip that provided some sweetness. The body was on the heavier side and oily with moderate carbonation. It had a lengthy finish with oak and vanilla. This beer was outstanding and perfectly integrated the wood with the IPA. I highly recommend this one.

One of the things about the craft beer scene that I think is very cool is the expansion of beer bus tours. I haven’t taken one (yet), but in Maine, it was a huge thing and also keeps people safe since they don’t have to drive. 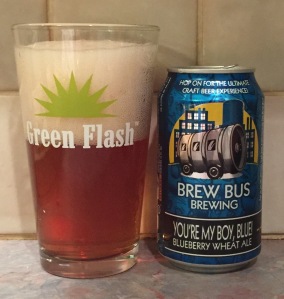 Trivia: According to the brewery website, “A blueberry wheat ale brewed with real blueberries to give it a natural deep purple color. We use Pacific Gem hops for optimal balance.”

This beer poured with a huge, four finger, orange-tinged head. It wasn’t all that thick and after I took the picture, dissipated rather quickly and didn’t leave much lacing behind. The body was a cloudy orange with some carbonation visible. The nose had notes of blueberries, but wasn’t overly sweet. Wheat was there as well, along with lemon zest and light malt. The taste was quite good. It started with tart blueberries and went into the lemon zest note that was evident in the nose. The wheat came through at the end and wasn’t the dominant flavor. I fully expected this beer to be a sweet berry bomb, but I was pleasantly surprised that it wasn’t. The body was thin with high carbonation, which was completely appropriate for the style. The finish was tart and fruity. I enjoyed this beer a lot. This would make for a great summer sipper and at $2.50 a can ($.21 per ounce), totally affordable. This could be my favorite of the Brew Bus series so far and one of my favorite blueberry beers. You can tell that they use actual blueberries as opposed to extract.