My first day off after end of quarter was relatively productive thus far. I finally got an oil change on my car and finished season two of “Big Love.” I also did a load of dishes and am working on a load of laundry. While I wait for that to finish, I figured I would type up some reviews. This is a brew that I picked up at my local beer store and it already had a few years of age on it, so I figured it was worth a try. 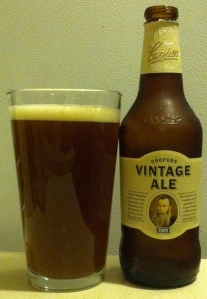 Trivia: According to draftmag.com, “Cooper’s Extra Strong Vintage Ale is an absolute beauty of a beer, with enough alcohol and flavor to stand up to any food, or just a cool night with a good book. Its aroma is rich with honey and caramel notes, and is not aggressive, but delightful, complementing the deep golden color and slightly hazy appearance. At first taste, you’re greeted with apricot, caramel, mild pineapple, and peppery notes. Coopers’ finishes slightly dry with lingering honey sweetness and a mild astringency on the cheeks. With its creamy carbonation and medium body, you can appreciate the beer now, or give it a year to really allow all the complexity to meld together. Either way, this is a superb beer.”

Random: The Phils play the Blue Jays tonight for some interleague play. I’m pretty excited to see that.

This brew poured with a one finger, white head that dissipated quickly and left no lacing on the glass. There was a slight crown left on top of the cloudy copper body that had lots of visible carbonation even with the cloudiness. There was also a lot of detritus in the beer, but after a few minutes, it settled down to the bottom. The nose was really sweet. I got some dark fruits, raisins, sweet malts and some booze as well. The taste had a lot of sweetness up front with caramel and toffee, then some bitterness came out. The raisins and dark fruit were present on the beer, but not nearly as much as the sweetness or the hop bitterness. The alcohol was present on the sip, but not overwhelming. The body was on the thicker side with high carbonation. It had a long finish with bitterness and toffee. This brew was pretty good. I think the fact that it had some age on it made it a little more mellow. It’s definitely worth a try.

Today was flat-out rough at work. I don’t know what it was, but everyone was just angry and incredibly escalated. When I finally got out of work, I got stuck at a train crossing for twenty minutes. Once I got through that, I hit traffic on the Turnpike. Then, Plainsboro Road was closed and I got lost trying to find an alternate route home. It was definitely not my day. Anyways, review time. Let’s see how this one went. 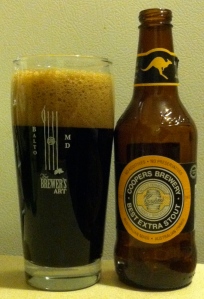 Trivia: According to the brewery website, “It reigns every winter. A consistent award winner both here and around the global, Coopers Best Extra Stout is as close to perfection any stout is likely to ever get. Bring on winter!”

Random: The other half and I split a calzone for dinner. I haven’t had a calzone in years and it really hit the spot.

This beer poured with a three finger, rather thin, tan-colored head. It dissipated slowly and left some lacing on the glass. The body was a very dark brown color with moderate carbonation visible. It also had lots of tan “floaties” at the bottom on the glass. The nose was really bitter chocolate with licorice and smoke present as well. The taste was strong with roasted malts, but also had licorice and really bitter chocolate with some coffee as well. There was also a touch of a medicinal flavor at the end of the sip. The booze was well-integrated into the beer and wasn’t apparent at all. It had a thick body with high carbonation that prickled the tongue. It had a quick finish with bitter chocolate lingering. This beer was alright, but it didn’t floor me. I wouldn’t rush back to have it again.