I took a trip out to this brewery awhile back and picked up a few bombers from them after having a sampler paddle. This was one of the beers I didn’t try on tap, but was interested in reviewing. 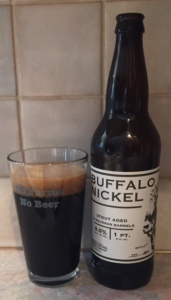 Trivia: According to the brewery website, “Buffalo Nickel is our Stout that has been aging in Buffalo Trace bourbon barrels for the last 4 months, and is finally ready to be enjoyed by the public. We will be pouring our first much anticipated glasses this Saturday Feb. 13th.”

Random: I used to collect coins as a child. I don’t know what happened to them.

This beer poured with a one finger, tan head that dissipated quickly and left no lacing on the glass. It left a small crown on top of the body. The body itself was a dark brown that you couldn’t see through and there was no carbonation visible as a result. The nose had roasted malts, coffee and some vanilla and bourbon. It didn’t have as much oak or bourbon as I would have thought or wanted. The taste had a lot more bourbon than the nose. It had vanilla and roasted malts, but not a lot of coffee. It had a certain sweetness from the chocolate as well. Oak and some smoke came through. All of the flavors were a bit muddled and didn’t transition overly well. The body was thick and sticky, as to be expected. It had light carbonation. The finish was lengthy with oak and roasted malts. A bottle of this was $14.99, which came to $.68 per ounce. I thought that was expensive given that this beer seemed to need a little more refining. I liked this beer and drank it with no issues and I would have it again, but I won’t search for it.

Today’s selection is from a relatively local brewery that I visited in South Jersey. This is one of their barrel aged selections. 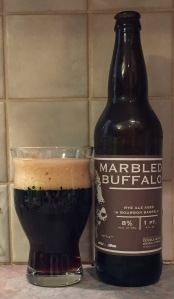 Trivia: According to the brewery website, “We’re not your average startup brewery. We don’t have a storybook tale about leaving boring desk job to turn a homebrewing hobby into a business. The truth is, we never did the desk job thing. Head Brewing and Co-Founder Drew Perry has been brewing beer his whole professional life, working his way from the packaging line to head brewer. At his most recent gig, Drew lead recipe development and contract brewing for a Virginia-based operation that produced beer for dozens of other microbreweries. But the dream was always the same: to return to New Jersey and start his own brewery, using his own recipes and sharing the experience with friends and family.”

Random: I picked this beer up directly from the brewery.

This beer poured with a huge, one finger head that was thick and light brown in color. It took forever to dissipate. The body was dark brown, yet relatively clear. There was no visible carbonation because of the color. The nose had a lot of bourbon with vanilla. There was some spice from the rye as well. The taste was rye, with a lot of malt and caramel. Toffee was present too. The bourbon note was strong when cold, but much more balanced When warm. Vanilla and prominent booze were next. It had a thick body with light carbonation. The finish was lengthy with light bourbon, vanilla and toffee. I think I paid about $12 for the bomber, which came to $.55 per ounce. I thought this beer was decent, I just wish the booze wasn’t as obvious.