Since we’ve moved, Val doesn’t go to Trader Joe’s as much as she used to. When she does go, she usually brings back a beer or two. This was a selection that she purchased for herself and really enjoyed. She let me have a few sips for research purposes. I knew absolutely nothing about this beer or the brewery before having it. 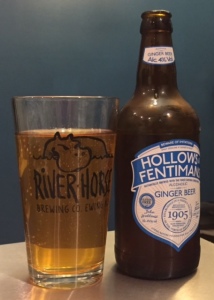 Trivia: According to the brewery website, “Unlike other so-called ginger beers, ours is the real thing. Using only the finest Chinese ginger root we botanically brew Hollows & Fentimans All Natural Alcoholic Ginger Beer. There’s no wine, nuts, hops, malts or any other artificial nonsense, that’s why we call it an All Natural Ginger Beer.”

Random: We used to love the breakfast burritos from Trader Joe’s. They changed the recipe and they were terrible and we haven’t bought them since.

This beer poured with a half a finger of white head that dissipated instantly and left no lacing on the pint glass. The body was a clear, golden-orange color with generous carbonation. The nose had fresh ginger and straw. Even as it warmed, I didn’t pick up much else. The taste had the same fresh ginger as well as ground ginger powder. It had straw and grain and a floral note as well. After a few sips, I picked up a note of lemon-lime soda too. The body was medium thickness with very high carbonation. The finish was lengthy with ginger powder and straw. A bottle of this was $4.99, which came to $.31 per ounce. I enjoyed this beer more than I thought I would. I’m not a huge fan of ginger beer, but this is one of the better ones that I’ve tried.