As I’ve mentioned, Val tends to like fruitier alcoholic beverages, so this was another one that she picked out. I’ve had Crabbie’s Original Alcoholic Ginger Beer and it looks like they’ve put out some variants due to its popularity.

Trivia: According to the brewery website, “We are excited to introduce the newest flavor to the Crabbies’ family, Scottish Raspberry. Available nationwide, Crabbie’s Raspberry Alcoholic Ginger Beer combines steeped ginger with exotic spices and natural Scottish raspberry flavor for a deliciously distinct, raspberry-ginger delight. Crabbie’s Raspberry is best served cold and poured over ice. Crabbie’s uses plump and juicy Glen Ample raspberries, which are indigenous to the Perthshire and Angus regions in Scotland, and are grown and cultivated in the Strathmore Valley to take full advantage of the fertile soil and temperate climate. They are harvested in mid-summer to produce the succulent fruits, which are then macerated and extracted for use in the Scottish Raspberry Alcoholic Ginger Beer. Crabbie’s is available for purchase in two formats: a four-pack of 11 ounce bottles and a larger 16.9 ounce bottle. Ideal for sipping, it can also be blended into a variety of ginger beer cocktails, such as a Raspberry Collins and a Moscow Mule.”

Random: This was first released in 2015.

The ginger beer poured with a quarter finger of head that dissipated by the time I took the picture. The body was a brilliant magenta color with a generous amount of carbonation. The nose was sweet and filled with raspberry extract, along with a slight spice note of ground ginger. There was a slight sweetness that was that was tangible as well. The taste was a bit of a disappointment. The artificial raspberry note was pronounced and there wasn’t enough ginger flavor to balance it out. The ginger was there and again, was more of a ground ginger than fresh. I could see the flavors working out better in a cocktail than on its own. The body was light and spritzer-like. The finish lasted longer than I expected with the same raspberry note. A bottle of this was $2.25 for 11 ounces ($.21 per ounce). I wasn’t a huge fan of this, but I’d be open to trying it again in a mixed drink.

Hard sodas are all the rage now, and although I’m not the biggest fan of them, Val likes them. So, I saw this on the shelf and brought home a four-pack for her and she gave me a few sips.

Trivia: According to the brewery website, “Get ready to go buckmild with Henry’s Hard Ginger Ale. We took the simple, delicious and refreshing taste of ginger ale, balanced herbal and ginger notes with real cane sugar, and added a little kick of something we call ‘maturity.’ It’s a modern twist on a classic, kind of like you.”

Random: I always associate ginger ale with being sick or being on a plane (since that’s what I would always get as a kid).

This soda poured with a quarter finger of white head that dissipated instantly. It left no lacing on the glass. The body was clear and light yellow in color. As I assumed, there was a lot of carbonation on this, like you would expect from a soda. The nose was filled with ginger and this odd artificial note. It wasn’t sweet but almost like plastic-like. It also had an herbal note that I couldn’t place. The taste had a sugary sweetness, almost like a ginger candy mixed with aspartame. The ginger in the taste was even more artificial and off-putting. The plastic note was muted in the taste but by no means was this good. The body was thick and almost syrupy with lots of carbonation. It had a quick, but sweet finish. The pounder can was $1.50, which broke down to $.09 per ounce, and certainly tastes cheap. I ranked this based on other hard sodas I’ve had and I rated this higher because it was drinkable, but I wouldn’t have it again.

I went back and forth over whether to post this review. Technically, this is not a beer, although it has about the same alcohol percentage as a typical macro. But, I decided since I post cider reviews, I could post one about this. Plus, every time I tune into the radio, it seems like they’re promoting the crap out of this beverage. So, I figured that I would try it straight up and see how it was. 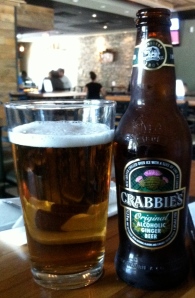 Trivia: According to the brewery website, “Crabbie’s Original Alcoholic Ginger Beer is carefully crafted from a recipe using ginger shipped from the Far East which is cold steeped for up to six weeks and then combined with four secret ingredients to produce its deep, deliciously spicy flavor.”

Random: The other things that were wrong with brunch were the fact that my order was awful. My biscuit was undercooked, my egg was overcooked and my potatoes were absolutely tasteless. My chicken was gross too along with bacon that was awful. The lawyer’s order was slightly better, and by better, I mean edible. The service was slow and when the cleared the plates that were over half full, the waiter didn’t even ask why. I don’t think you could pay me to go back.

This beverage poured with a one finger, white head that dissipated slowly and left a slight crown on top. The body was a clear, golden color with light carbonation visible. The nose presented with a lot of ginger, albeit not surprisingly. I didn’t get much else. The taste was really intense with lots of ginger and some herbal notes as well. Obviously, ginger really took over the flavor. The body was thicker than expected with high carbonation. There was a long herbal and gingery finish. To me, this would be great to mix a drink with, but it was pretty overwhelming on its own. The lawyer ended up liking it, so I gave it to her to finish. I will say that it’s definitely one of the more unique alcoholic beverages on the market.