One thing that I never realized about Trader Joe’s is that they advertise. I didn’t realize this until I was out in California for a business trip and they had constant radio ads. This cider, is specifically made for them by Gordon Biersch. Val picked it up and let me have a sip of it.

Trivia: They also have a spiced version of the cider, which I have yet to try.

Random: Since I post so far in advance, this won’t be pertinent by the time you read it, but I am not a fan of long business trips. I’ve been in California for over a week now and I am beyond ready to go back to Jersey. Val came out for the weekend, but had to get back to work, so I’m stuck by myself again. I have 4 more days until I go home.

This cider poured with a touch of white head that dissipated instantly. There was none left by the time I went to take the picture and no lacing was left on the glass. The body was clear and golden-orange with high carbonation visible. The nose had a lot of fresh ginger that burned the mouth a bit. It also had apple juice, but ginger dominated the nose. The taste was much of the same. It had ginger as well with yellow apples and apple peel. The body was light with carbonation that was a bit lacking. It had a lengthy finish with the same ginger. Although this cider was very affordable ($2.49 a bottle, $.11 per ounce), but there was no balance to this. I wouldn’t have this again.

The lawyer is still stuck at work. I bet she’s upset that she’s missing yet another Netflix. This one is a movie from 1997 about Oscar Wilde. It has a very young Jude Law in it. It’s mildly interesting at best. This is a cider that the other half picked up at Trader Joe’s awhile back. Let’s see how this one was. 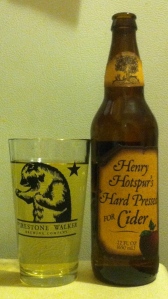 Trivia: According to wikipedia.com, “Sir Henry Percy KG (20 May 1364 – 21 July 1403), commonly known as Sir Harry Hotspur, or simply Hotspur, was a late medieval English nobleman. He was known as one of the most valiant knights of his day, and was a significant captain during the Anglo-Scottish wars. He later led successive rebellions against Henry IV of England, and was slain at the Battle of Shrewsbury in 1403 at the height of his career.”

Random: For once, I really don’t care about who wins the Super Bowl.

This cider poured with absolutely no head on top of a clear, green-tinged body with light carbonation visible. The nose was straight apple juice without much else. The taste was much of the same. Red delicious apples and juice along with nice bubbles on the tongue. The body was thicker than expected. Despite the very slightly elevated ABV, there was no alcohol on the taste. The finish was neither long, nor short and had crisp, apple juice. This cider was straightforward and tasty, but in that, it was boring. It didn’t do much for me and I would not rush to have it again.