A year ago, my Dad gave me an Apple watch that he received as a gift. For some reason, I just wasn’t a big fan of it and switched to a Fitbit watch and I absolutely love it. I do a lot of walking for my job, so it tracks it and it yells at me if I sit too long, which is perfect. 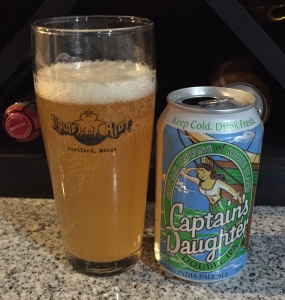 Trivia: According to the brewery website, “Our newest year-round is an Imperial India Pale Ale brewed with high-quality pilsner malt and flaked oats, making this beer light in color but certainly not in body or alcohol content. It is aggressively hopped with Mosaics out of the Pacific Northwest, giving the Captain’s Daughter a strong aroma and flavor of tropical and stone fruits.”

Random: I’m not a huge fan of the can art on this beer.

The beer poured with a one finger, white head. It dissipated slowly and left some lacing on the glass. The body was bright yellow and slightly cloudy. It had a lot of carbonation visible. The nose was filled with citrus. It smelled like freshly cut grapefruit, orange and lemon segments along with pith. There was also a hint of malt as well. The taste was really crisp and citrusy. It had some cracker malt along with orange and grapefruit segments and pith. There was some grass in the background as well, but alcohol was very well-integrated. The body was on the lighter side of the style with moderate carbonation. It had a lengthy, bright, citrus finish. My parents brought this beer back for me from Massachusetts, so free beer, yay! Even if I had to pay for it, I loved this beer. It’s worth seeking out.

While we were in New York, we went to the Standard Biergarten. I had been there before, for my Bachelorette party, but Val had never been there. We ended up staying for a few hours, playing shuffleboard. To my surprise, Val was very good at shuffleboard and almost beat me (not that I’m competitive or anything). Anyways, beer time. 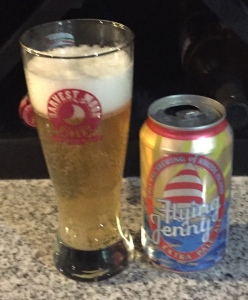 Trivia: According to the brewery website, “An unfiltered extra pale ale crafted with five different malts and complimented by northwestern hops make this brew one to enjoy year-round. Generous amounts of hops in the kettle and fermenter give our EPA a citrusy and floral flavor and aroma. Available on draft and in 12-ounce cans.”

Random: This beer comes in at 54 IBUs.

The beer poured with a thick, three finger, creamy pure-white head. It dissipated slowly and left some lacing on the glass. The body was clear and bright yellow. The nose was with citrus and tropical fruit. I picked up grapefruit flesh and pith along with mango and pineapple. The taste was also filled with hops, specifically lots of grapefruit flesh. It had a touch of pine and not as much tropical fruit as the nose. It was quickly backed up with biscuit malt. The body was very light with a lot of carbonation. The finish was quick and filled with citrus. A can of this was $1.83, which broke down to $.15 per ounce. This was a solid pale ale that I would have again, but not a standout of the style.