This is only the fourth beer I’ve had from the brewery. Every time I have a beer from them, I wonder why I haven’t explored their portfolio more because their beers are ridiculously good. This one is no exception. 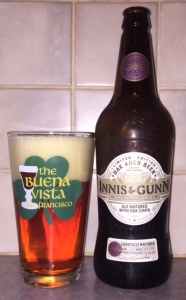 Trivia: According to the brewery website, “Following the lengthy time it’s spent mellowing over oak, the beer has developed a fragrant aroma of spice and rich toffee. The wood has also imparted notes of heather-honey, raisins and marzipan, making for a beautifully-balanced, complex ale, capped with a deeply smooth finish.”

This beer poured with a three finger, white head that dissipated slowly and left some lacing on the glass. The body was a clear, light mahogany color with light carbonation visible. The nose had notes of oak, vanilla and brandy. Peat came through as well. The taste had some sweetness and brandy notes along with peat, oak and vanilla. After a few sips, I picked up butter and caramel. The alcohol was well hidden. It had some spice and golden fruit as well. The body was on the thin side with light carbonation. It had a quick finish with oak and vanilla. This was a really solid beer, which seems to be the trend from this brewery. This was $8.99 for the bomber, which was $.41 per ounce. This wasn’t a cheap beer, but I would highly recommend this one, especially to a scotch drinker. I would definitely have this one again.

I love beer, don’t get me wrong. But, I have another love other than beer. That love is Irish whiskey. Whenever I see a new one, I have to try it. I drink my whiskey neat and I just love the smokiness of it and that burn at the back of the throat. I saw the press release when this beer came out over a year ago (as a limited offering) and didn’t pick it up. When I saw it was released again, I knew this one was coming home with me…

Trivia: According to the brewery website, “Our sturdy Scottish Stout gains even greater flavour during its maturation in rare oak casks, obtained from a renowned Irish Whiskey distillery. The resulting beer is rich, complex and velvety smooth with notes of coffee and dark chocolate, and proves that it pays to have friends in the beverage business.”

Random: The only thing that didn’t thrill me about this beer was the fact that this was offered in clear bottles. I don’t really understand the point of that.

This brew poured with a two finger thick tan head. It dissipated slowly and left decent lacing behind on the glass. The body was a dark brown, almost black color. There was no visible carbonation in the brew due to the color. I haven’t had many Scottish stouts, so I was curious to see what the nose presented. It had the very familiar roasted malts and dark coffee notes that I’ve come to expect from a stout. What was a pleasant surprise was the touch of whiskey that came through with vanilla. The taste of the stout was sweet at first, almost as if there were some lactose added to it. Then, roasted malts and milk chocolate took over the palate with whiskey and vanilla following directly behind. The body was medium thickness with moderate carbonation. The finish was quick and roasty. For a beer that advertises that it uses whiskey casks, this was one of the more delicate beers that I’ve had and it was incredibly well done. Go try this one if you see it.

For Christmas, my father went to his local liquor store and picked me up a bunch of beers that had ratings over 90 points. He doesn’t keep track of what I’ve had, but always manages to pick out some winners. This happened to be one of them that I shockingly haven’t had.

Trivia: According to the brewery website, “This is our flagship beer, the one whose discovery led to the formation of the company back in 2003. Since then we’ve won a string of awards for Original, most recently a third consecutive Modern Monde Selection gold award. Like the world’s great wine and whisky makers we strive for depth of flavour, complexity and mellowness in every beer we produce. Innis & Gunn Original typifies this approach. Its lengthy 77-day maturation imparts flavours of toffee, vanilla and oak that perfectly complement the beer’s backbone of luscious malt and fruity hop notes. The oak helps to give Innis & Gunn Original its appealing colour and also mellow the alcohol character, so although the beer is 6.6%, it’s very smooth and easy to drink.”

Random: My newest series that I’m watching is Rome: Engineering an Empire. So far, so good.

This brew poured with a three finger, white head that dissipated slowly, yet left no lacing on the glass. The body was a clear orange color with lots of carbonation visible throughout. The nose was huge with some oak and toffee and vanilla as well. The taste was just like the nose, big. I got lots of oak with toffee and vanilla following up quickly. A touch of hops came through but were quickly tamed by the oak. After a few sips, I got some caramel as well. The body was on the medium side with heavy carbonation. The finish was long with warm oak. I really enjoyed this one. I could see why this one is so popular. I would definitely have this one again.

This was the brew that Katie picked out for me last night. I picked a four pack of this up at Spirits Unlimited in Shrewsbury on July 3rd. I saw a few posts regarding the release of it, but I haven’t seen any reviews of it to date. I don’t have a huge amount of experience with Innis and Gunn. This is actually my first review of any of their beers. I have tasted a few of their offerings at different beer festivals and remember liking them. So, let’s crack this one open.

Trivia: According to the brewery website, “One of America’s National Symbols, ‘Uncle Sam’ is a real man of Scots decent. Samuel Wilson’s parents sailed to America from Greenock, Scotland. Samuel supplied the army with meat in barrels during the War of 1812-15. The barrels were prominently labelled “U.S.” for the United States, but the soldiers joked that the letters stood for “Uncle Sam.”

Random: Does anyone else find it funny that a Scottish brewery brewed a beer in honor of American Independence Day?

First of all, this brew comes in a clear glass bottle. The four pack is really tall, so that should have kept most of the light out and given that it was brewed for July 4th, I’ve assumed that it was pretty fresh anyways. It just strikes me as odd that they would choose a clear bottle. Now that I’ve successfully gone on a tangent, back to the beer in hand. This brew poured with a two finger white head that dissipated quickly and left no lacing on the glass. The body was a clear mahogany color with an insane amount of carbonation visible. The nose was really pungent…a lot of oak and some nutty sweetness. Despite the heat, it was still in my wheelhouse. The taste was much like the nose, very oak dominant. I also got vanilla and a hint of nuttiness with some tobacco. This drank more like a brandy or a good bourbon rather than a beer. I really loved the flavor. The body was thick with lots of carbonation. The finish was lengthy with some booze warming on the end. Although most people will find this one a little heavy for a brew that is marketed on one of the hotter holidays of the year, I absolutely loved it. Throw the AC on and sip this one.