In High School, I used to drink a lot of Mountain Dew soda because I thought it had more caffeine. Between sports and studying, I thought it would help me stay up. I was never a big fan of the flavor, but it did the job. 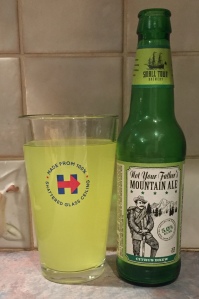 Trivia: According to the brewery website, “NOT YOUR FATHER’S MOUNTAIN ALE – Camping, glamping, skiing, hiking. There are all kinds of fond memories you’ve created on one of America’s grand peaks. They’re basically giant playgrounds ready for action. Those memories and that energy is exactly what inspired us when we brewed up Not Your Father’s Mountain Ale. Let’s be honest – no one’s ever had a bad time on a mountain. TASTING NOTES – If you want citrus, this is your beer. A big ol’ wallop of crisp citrus notes invades your mouth on the first sip. A smooth finish means you can knock back a few of these by yourself – or split a sixer with friends. You don’t even have to be on a mountain.”

Random: The first time I brought a Red Bull into my high school, my teacher asked if it was a beer.

The beer poured with no head at all. It had an electric, greenish-yellow body with moderate carbonation. The nose was sweet soda syrup with lemon-lime notes. The taste was sickening sweet with lemon and lime. It was like mixing a bad soda and booze. The body was thankfully, light with lots of carbonation. It had a quick finish with corn syrup sweetness. A bottle was $2.16, which came to $.18 per ounce. I didn’t like this at all. This is one to avoid.

I tend to get up earlier than Val on weekends because I’m so used to getting up for work. I’ve been trying to catch up on “Live PD” while she’s asleep and I update the blog. If you haven’t watched it, it’s really interesting. 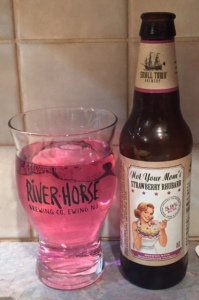 Trivia: According to the brewery website, “Sometimes rhubarb gets a bad rap. It’s a vegetable that masquerades as a fruit and almost always gets paired up with its much more celebrated friend, strawberry. Well, rhubarb finally gets half the stage with Not Your Mom’s Strawberry Rhubarb, a flavored craft brew that reminds of you the fresh pies Mom used to take out of a box she got at the local bakery. The perfect balance of sweet and tart, this beer is made with real strawberry and rhubarb juices. This brew is so authentic, you can start fighting now for the last slice….err…bottle.”

Random: This was a beer that I picked up for Val.

This beer poured with a very small white head that went away by the time I took the picture. The body was clear and bright pink in color with a large amount of carbonation visible. The nose was all strawberry and no rhubarb or any other notes. The taste was sweet strawberry syrup and simple syrup with a touch of rhubarb. The sweetness was cloying and needed something to balance it out. The body was on the lighter side with too much carbonation. It had a quick finish with strawberry. A bottle of this was $1.83, which broke down to $.15 per ounce. This was definitely too sweet for me, but if you’re into really sweet sodas, you would probably like this.

Happy New Year’s Eve. One of the changes that I’m making in the New Year is that all posts will go up at 5 PM EST. I used to have it that the weekend ones would post at 10 AM, but since I post so far in advance, it’s hard to keep track of. So, now that we’ve talked about that change, let’s get to the beer. 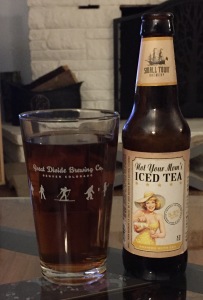 Trivia: According to the brewery website, “There are some days that are just made for iced tea. And then there are days when you need a little something harder. We’ve answered your prayers with Not Your Mom’s Iced Tea, a thirst- and stress-quenching twist on the classic drink people everywhere turn to for good ol’ fashioned refreshment. Don’t tell the Brits, but in America, we like our tea on ice. This classic flavor is made with real lemon juice, creating a perfectly balanced and refreshingly smooth brew.”

Random: I’m almost done with the first season of “Legion.” It’s really difficult to follow, but I like it.

This beer poured with no head on top of a dark brownish-red body. It was clear with a decent amount of carbonation visible. The nose had notes of a powdered iced tea mix. It had a bit of lemon as well. The taste was like a packaged iced tea with a lot of artificial notes. It also had some lemon flavor to it. It had a touch of bitterness as well, but this was more along the lines of a sweet tea. The body was heavy with light carbonation and could have used a bit more. The finish was lengthy with iced tea mix. A bottle of this was $1.90, which came to $.16 per ounce. I had no issues finishing the bottle, but this would get old really quickly. I wouldn’t buy this one again.

This was another beer that came home because Val really likes the Not Your Father’s selection. She let me have a couple of sips of one.

Trivia: According to the brewery website, “Driven by passion for American heritage and ingenuity, Small Town Brewery’s founder and brewmaster, Tim Kovac, is forever experimenting with cherished classics. Kovac’s fond memories of his family’s homemade ginger ale and hard lemon candy inspired him to spend several years painstakingly refining his recipe for a sessionable, alcoholic ginger ale with a nuanced, yet refreshingly familiar taste and aroma. Not Your Father’s Ginger Ale presents a masterfully-balanced ginger and citrus body, with hints of black currant lending complementary floral and fruity spice notes. The end result is a pioneering craft specialty ale that delivers what we believe is a truly worthy and unparalleled evolution of another beverage icon.”

Random: This is a year-round offering from the brewery.

The beer poured with less than a quarter of a finger of white head that went away instantly. It left no lacing on the glass. The body was clear and straw-yellow in color, filled with carbonation. The nose had notes of sugar and ginger. I kept sniffing, but I didn’t find anything else. The taste was a combination of fresh ginger and Sprite. It had a white sugar note as well. This was not complex, to say the least. The body was light and it had too much carbonation for me. The finish was quick with ginger and sugar. A bottle of this was $1.83, which came to $.15 per ounce. I found this to be a bit gimmicky and not worth a second try.

Val seems to like the Not Your Father’s selections. I tend to not be a big fan. Their beers/hard sodas are on the gimmicky side and the success of their root beer lead to many other competitors and things like “hard orange soda.” But, since Val likes them, we usually have a few in the house. This was one that she was excited about, so let’s see how this one was.

Random: I only like diet sodas. I never got a taste for full sugar sodas.

The beer poured with a two and a half finger, off white head. It dissipated rather quickly, but left no lacing on the glass. The body was cloudy and amber, bordering on light brown. There was a lot of carbonation visible. The nose was not complex. It had vanilla, nutty malt and caramel. The taste was overwhelmingly filled with vanilla. Caramel and nutty malt came next with a lot of sugary sweetness. Balance was not this beer’s strong suit. The body was thicker than I would have liked and made the sweetness more cloying, even the carbonation couldn’t help fix that. It had a lengthy and sticky finish. A bottle of this set me back $1.83, which came to $.15 an ounce. This beer needed balance, otherwise it was just a vanilla sugar bomb.

The next place we ended up was a brewery/restaurant in Portland called Liquid Riot. They are owned by the same people who own the famous beer bar Novare Res. The brewery is behind the bar and you can watch them brew as you enjoy your beer. The staff was attentive and very friendly. I tried a few samples which were impressive and ended up taking a few bottles home as well. We had to get to dinner, so we didn’t spend a lot of time there, but I would go back if I was in Portland. 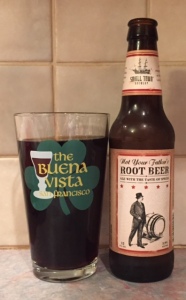 Trivia: According to the brewery website, “Silky, smooth and satisfying finish is unmatched in flavor. It appeals to craft beer aficionados as well as those who don’t typically drink beer but crave something unique. Because of the overwhelming response to Not Your Fathers Root Beer, we have had thousands of requests from all over the country for this product in a package format. We’ve worked relentlessly with experts for almost two years to figure out how to increase production to meet demand while keeping the cost to consumers reasonable.”

Random: Parking in Portland was pretty cheap for a city.

This beer poured without any head on top of a dark brown body. Due to the color of the body, there was no visible carbonation. The nose smelled…well, like root beer. It had a lot of vanilla, licorice and sarsaparilla. The taste was also, exactly like root beer. It had some caramel sweetness, licorice, vanilla and the same sarsaparilla. There was no booze to this either. The body was medium thickness with high carbonation. It had a long finish with vanilla and licorice. This was $2.17 a bottle ($.18 per ounce). I can see why this is so popular. It’s not a bad choice for those who don’t like beer and basically tastes like a soda. I couldn’t have more than one of these, but it was enjoyable. I also ranked this quite high because I feel that it executed what it set out to do, so although a lot of people don’t like this, I thought it was well-done. At a minimum, it is definitely polarizing.