Today’s selection is relatively local, coming from Spellbound Brewery, which is about 40 minutes from my house. They received a lot of press in 2015 because of their silver medal at GABF for their Palo Santo Porter, which I’ve had a sample of, but now they offer in cans, which I’m sure I’ll get to reviewing. For now, we’ll stick with their regular porter.

Trivia: According to the brewery website, “Robust malt forward beer with notes of chocolate and coffee. Medium bodied. Malty goodness without being overly strong in ABV, finishes with a hint of chocolate malt sweetness.”

Random: All of this press is doing great things for Jersey beer. We’re no longer the laughing stock of the beer community.

This beer poured with a one finger, tan-colored head that dissipated slowly. It left no lacing on the glass. There was a crown left on top of the dark brown body with no visible carbonation due to the color. The nose had some cocoa powder, licorice and roasted malts. It had a certain amount of sweetness to it as well, like a malted milk ball. The taste had the same cocoa powder and light black licorice. There was the same smoke and a touch of raisin came through right at the end. Roasted malts were present too. The body was on the thicker side of the style. It had moderate carbonation. The finish was long with roasted malts and licorice. This was $1.67 a can, which came to $.14 per ounce. This was a nicely balanced, well done beer that didn’t go overboard on the licorice and had some really nice sweetness from the chocolate malts without it being cloying. I really enjoyed this beer.

This was the last beer that we had at the event. We didn’t stay there for a long time, but it was still really crowded around 5 PM, when I had this beer. The bar underneath where I put it was covered in water. I didn’t realize this when I stuck my arm in it and ended up with a wet fleece. This is the first time I’ve seen this beer from them and given the rainy weather out, I was in the mood for a porter. 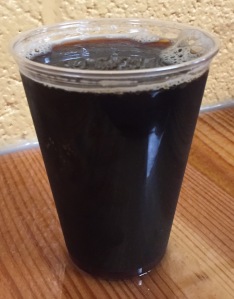 Trivia: This is a different take on their normal porter.

Random: I could go for a cup of coffee right.

This brew poured with a half a finger of tan head. It dissipated quickly and left no lacing on the plastic cup (I’m not sure if that’s because it was in a plastic cup or because it just didn’t leave lacing). The body was black with no visible carbonation. The nose was intense with strong, black coffee, almost like an espresso. It also had dark, baker’s chocolate and some roasted malts. The taste was not quite as good as the nose. It had dark, roasted malts up front and transitioned into black coffee, but less intense coffee than the nose. I would say it was like a black cup of convenience store coffee. The dark chocolate was there as well, but it hit at the end of sip. It had a medium thick body with more than enough carbonation. The finish was lengthy with the same coffee note. This beer was good and I didn’t have a problem drinking it, I just wish it tasted like I thought it would based on the nose.

This was the beer that Val got at the Spellbound event. We managed to find a place in the brewery where we could put our cups on pallets holding kegs while we hung out. It was also much less crowded and drier in there. Let’s see what I thought of this beer. 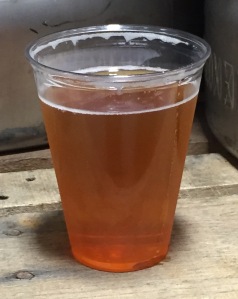 Trivia: According to the brewery website, “Dark golden in color. We add cherries to the fermentation on our tripel. Aromas of cherry and fruity esters from the yeast. Finishes with a hint of honey sweetness and lingering cherry.”

Random: This is a seasonal from Spellbound and available October through November.

This beer poured with less than a half a finger of white head. It dissipated quickly and left no lacing on the plastic cup. The body was a warm, orange color with light carbonation visible. The nose had notes of cherry, yeast and very light spice to it. Some golden fruit came through too, specifically peach. The taste, on first sip, didn’t strike me as the normal tripel. First of all, the taste was very light for the style. I picked up notes of cherry, apricot and peach. Golden raisins came through after a few sips, too. Very subtle yeast was present as well. There wasn’t much spice either. The body was overly thin with moderate carbonation. One of the good things about the beer was that the alcohol was well-integrated. The finish was quick with the same fruit notes that I picked up before. I really wanted to like this beer, but it was a flat-out miss for me. It was too light for a tripel and just needed more depth.

The other half and I went to the Spellbound 1 year anniversary a few months back. Since I had to work in the morning, we got there about 4 PM after a lot of the beers had been tapped and kicked. It was rainy, but they had a tent in the back with music (which was insanely loud) and each table had a different beer. Instead of cash, you bought tokens at the front for a beer, which was a good way to do things as it was pretty quick to get a beer. This was the first one I had there.

Trivia: According to the brewery website, “Spellbound is 3 passionate beer geek homebrewers that decided it was time to take our recipes to the big leagues.”

Random: This was the beer they brewed for their 1 year anniversary and there was no information online about it.

This beer poured with a very small, white head that dissipated quickly. It left some lacing on the plastic cup. The body was a hazy mahogany color with no visible carbonation because of the darkness of the body. The nose was fragrant with bourbon, vanilla, booze and some molasses as well. The taste was equally strong. There were the expected characteristics from the bourbon-barrel aging: vanilla, molasses and oak. Some smoke came with it as well. The booze was present and warmed the back of the throat, but it wasn’t overwhelming. Sweetness, in the form of toffee and caramel were there, but it wasn’t cloying and helped to balance out the other flavors. It had a thick body with light carbonation. The finish was lengthy with ash, bourbon and vanilla. This was a really enjoyable beer and one I could see sipping by the fire or enjoying with a nice cigar. It’s definitely worth a shot if you can get your hands on it.

This was a beer I was excited to try. I’m a huge fan of having local beers and when the other half brought this home, I had never had a beer from the brewery. Before the review, I managed to visit the brewery and sample a few beers from them. This is their flagship beer and one of the only beers from them that I’ve seen canned. Time to crack it open. 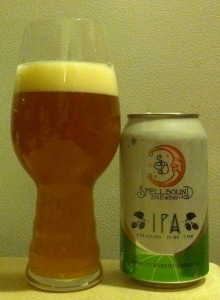 Trivia: According to the brewery website, “One of our flagship beers. Aggressive hoppy aromas and flavors intertwined with a malty backbone to balance it out. Dry hopped to bring out a blend of bright citrus and pine hop character.”

Random: We have about a half an inch of snow here. I am not looking forward to my drive in tomorrow.

This beer poured with a two finger, slightly off white head that dissipated slowly and left some lacing on my IPA glass. The body was a hazy, bright orange color with moderate carbonation visible. The nose was big with lots of grapefruit and tropical fruit. Specifically, mango and pineapple. The taste had a bit more depth. I got the same grapefruit and tropical fruit in the taste, along with pine and grass. There was only a little bit of malt at the end to balance it. The body was relatively thick with generous carbonation. It had an intensely bitter finish with pine and mango. I really enjoyed this beer, which was $1.50 a can, which is about $.12 an ounce, which is definitely worth it. If you see this on the shelves and you enjoy IPAs, definitely give this one a try.

The other half and I went to the brewery a week ago and this was my favorite beer of the sampler. We also loved their growler design, so needed an excuse to bring one home. Let’s see how this one was. 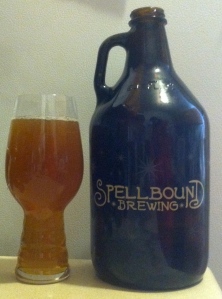 Trivia: According to the brewery website, “We have been brewing at home for many years and decided it was time to take our recipes to the big leagues! We are all passionate about craft beer and helping the community where we can. Look for us at fests and charity events all over NJ. Stop by, introduce yourself and chat over a finely crafted beer! We are opening with a 20 barrel brewhouse, 4 – 40 barrel fermenters, and 2 – 10 barrel fermenters for some of the more extreme beers. We also will be canning and kegging our beers for distribution in NJ. We will have a 1000 sq foot tasting room to pick up growlers, package goods, and sample pints of our brews.”

This brew poured with less than half a finger of white head that dissipated quickly and left some lacing. The body was a hazy, orange color with light carbonation visible. The nose was filled with fresh peach and grass with some grapefruit. The nose was really inviting. The taste was just as good. The peach flavor was there, but wasn’t overwhelming and allowed the grass and pine and grapefruit to come through. There wasn’t much malt to speak of. There was some alcohol at the end of the sip. The beer was on the thicker side with moderate carbonation. It had a long finish with peach and grapefruit. I really enjoyed this beer, especially because the peach was so well integrated into it. I would definitely have this one again.