The Bruery store in DC was a lot smaller than I thought it would be. But, it had a huge selection of beers that I had never seen before and some cool looking merch. It’s also right by Union Market, which is a huge market with different food and beverage vendors. The best thing I had there were these steamed buns, which I would definitely go back for.

Trivia: According to the brewery website, “What’s better than splitting a PB&J sandwich with your favorite buddy over lunch? How about sharing this PB&J-inspired beer instead? This lunchtime ale was brewed with lactose; with peanut flour, boysenberries and salt added.”

Random: As a child, I loved peanut butter and strawberry jelly sandwiches. I was very averse to grape jelly.

The beer poured with a thick, slight pink tinged head that was two fingers high. It took awhile to dissipate and left a lot of lacing on the glass. The body was a murky reddish-brown color with no visible carbonation. The nose started with peanut butter and transitioned into red grapes, berries and some toasted malt. The taste started with peanut butter and then went into berries and grape jelly with a slight coffee note as well. There was a white bread note present too. The body was medium thickness with moderate carbonation. It had a lengthy and sticky finish with peanut butter and grape jelly. This was an interesting beer for sure, but it delivered what it promised. I enjoyed it, but this wouldn’t be a beer that I would want to have constantly.

This was another beer that I picked up at The Bruery store in DC. 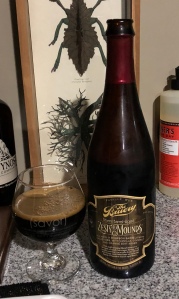 Trivia: According to the brewery website, “Barrel-aged Beer Day is our staff’s day for premiering flavors that cannot be achieved outside of the art of the blend or by any one beer. This staff-winning blend, created by Jennifer Anderson, Conner Coghill, Adam Funderberg, Jeff Scott, Andrew Stretch and Patrick Traster, showcases mounds of candy bar-esque flavors, with vanilla, coconut, cacao nibs from TCHO and orange zest folded into an exclusive fusion of some of our darkest, richest and most malt-forward bourbon barrel-aged beers.”

The beer poured with a one finger, brown head. It dissipated slowly and left some lacing on the glass, along with a small crown on top of the black body. Due to the color of the beer, I couldn’t see any carbonation. The nose of the beer started with the expected barrel characteristics with smoke, char, leather and then went into dark, roasted malts. Dark chocolate and vanilla came next with some coconut. The taste was even more intense than the nose. It had dark roasted malts and dark chocolate upfront and then transitioned into vanilla, oak, coconut and a touch of orange as well. Molasses and smoke were present as well. The alcohol was present, but not overwhelming. The body was thick and chewy with light carbonation. It had a lengthy finish with coconut and dark chocolate. This beer was outstanding and very complex. I highly recommend this one.

Two cream ales in a row! This was a collaboration beer with Funky Buddha out of Florida, so let’s see how it was.

Trivia: According to the brewery website, “This sensory getaway transports you to a corner bodega with our friends at Funky Buddha in South Florida to recreate the flavors you’d find in a Cuban guava pastry. Championing the big, bold flavors that both of our breweries are known for, we brewed an imperial cream ale, adding lactose and vanilla to impart sweet, custard-like ribbons, and guava for filling its conceptual authenticity. It’s a collaboration that’s equal parts inspiration and admiration.”

Random: They recommend pairing this beer with shrimp empanadas.

The beer poured with a one finger, white head. It dissipated quickly with some lacing left on the glass and a small crown. The body was super cloudy and bright yellow in color with lots of carbonation visible. The nose was filled with guava and lactose. I was pleasantly surprised that it didn’t have any extract taste. It also had a light malt characteristic. The taste was sweet with guava, but quickly taken over by lactose and vanilla. It also had a bready characteristic to it. It wasn’t nearly as bright as the nose, but still was solid. The body was medium thickness with moderate carbonation. It had a quick finish with vanilla. A bottle of this was $14.99, which came to $.68 per ounce. I enjoyed this beer, but it needed more guava in the taste and it was definitely a little too expensive, but what Bruery beer isn’t.

I’ve walked past this beer a few times, but I needed to try it, since I love mole inspired beers. 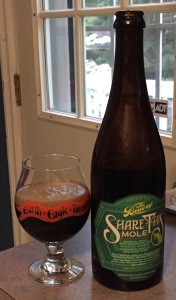 Trivia: According to the brewery website, “Let’s move beyond the concept of grabbing a beer, and reach for something bigger. Share This beer and be part of helping friends become mobile for the first time in Mexico – the source and inspiration of select ingredients in this beer. Each release in our Share This series spotlights unique ingredients and an important cause. Share This: Mole is a mole-inspired imperial stout collaboration with Chef Anne Conness, featuring ancho chilies, chipotle peppers, cinnamon, vanilla and cacao nibs. For each bottle we produce, Free Wheelchair Mission receives one dollar.”

Random: The best mole that I ever had was in Chicago at Frontera Grill.

The beer poured with a full finger of light brown head. It dissipated slowly and left a lot of lacing on the glass. The body was black with no visible carbonation. The nose was what I expected: cocoa powder, lots of chili peppers and cinnamon. I didn’t pick up much vanilla, but that’s a scent that tends to get overwhelmed. The taste had a bit more depth. It had dark cocoa powder, cinnamon and vanilla. It had some chili pepper, but not enough for my preference. There was also some smoke as well and a touch of booze. The body was thick, bordering on syrupy and had light carbonation. The finish was lengthy and sticky with dark chocolate and cinnamon. I picked up the bomber for $16.99, which came to $.77 per ounce, which was on the pricey side (as Bruery beers tends to be). Despite the price, I thought this was a really good beer, especially for a winter night. If you like these flavors, it’s worth picking up.

Awhile back, I had a business trip in California and Val joined me for a long weekend. We made our way to The Bruery and took a tour. This was one of the beers that we drank during the tour and Val loved it. Since it was on tap at Brickwall, Val got a glass.

Trivia: According to the brewery website, “Horchata is a traditional, sweet, milky drink originating in Spain and Latin America that has become quite popular in Southern California, particularly with Mexican cuisine. Our homage to the traditionally non-alcoholic drink is a blonde ale brewed with a heavy dosing of rice, cinnamon and fresh vanilla beans along with lactose for a little extra creamy character. These ingredients meld together to create a taste and experience that hints at horchata, but it’s much more than that. The flavor is hard to describe, but for those who know it, you know you love it.”

Random: I’ve never had a real horchata. That needs to be rectified.

The beer poured with less than a quarter of a finger of white head. It dissipated almost instantly and left no lacing on the glass. The body was a straw yellow color with a tinge of cloudiness and moderate carbonation. The nose was filled with cinnamon, nutmeg, vanilla and grain. It was incredibly inviting. The taste was even better than the nose. The cinnamon and nutmeg notes were prevalent, along with rice and milk sugar. Vanilla came through as the beer warmed. The alcohol was well-hidden. It had a moderately thick body with just enough carbonation. The finish was lengthy with cinnamon and nutmeg. I thought this beer was outstanding. This is one of the best horchata inspired beers I’ve ever had.

One of the highlights of my California business trip was going to The Bruery. I was a bit surprised that it was in an office park and also surprised that the tasting room was relatively small for a brewery that size. I will say it had one of the best tours I’ve ever been on and we got to sample this beer while we were there.

Trivia: According to the brewery website, “An English-style barleywine aged in bourbon barrels, Mash is an intense yet balanced beer with notes of burnt caramel, toasted bread, ripe pear, dried figs, vanilla, toasted coconut and finishes with oak tanning. This has become an instant favorite around the brewery due to its balance, subtle complexities and overwhelming deliciousness.”

This brew poured with a one finger, cream-colored head that dissipated quickly and left no lacing on the glass. There was a small crown on top of a mahogany-colored, hazy body with no visible carbonation because of the color. The nose was filled With bourbon and vanilla. It also had caramel, booze, leather and figs. The taste smacked me in the mouth with a sharp booze note. After I adjusted to it, I picked up caramel, burnt brown sugar, vanilla and bourbon. There was also notes of toasted brown bread and figs. It had a medium thick body for the style with a lot of carbonation. The finish was lengthy with alcohol, bourbon and vanilla. A bomber of this was expensive at $21.99 ($1 per ounce), but if you’re into the style, it may be worth it. This beer would definitely benefit from a few years of age to tame that booze note, but this was a good start.

While I was out in California, I found a small gastropub with sandwiches and salads and some interesting draft selections. I stopped in for an early dinner and they had this on draft. Even though I went to The Bruery a few days prior, I didn’t remember seeing this one on tap.

Trivia: According to the brewery website, “Batch No. 1731 is a 100% brettanomyces-fermented hoppy session ale created by homebrewer Kevin Osbourne of Los Angeles. When we judged through all of our competition entries, his complex yet quaffable creation shouted WINNER! (as well as tropical! funky! and dry!). It puts El Dorado, Mosaic and Chinook hops on a pedestal as much as one possible could.”

Random: The tour at The Bruery was one of the best I’ve been on, behind Flying Dog.

The beer poured with a thick, one finger, cream-colored head. It dissipated at a slow pace and left spiderweb lacing on the glass. The body was bright orange and hazy with no visible carbonation due to the haziness. The nose had a lot of orange peel and a touch of tartness. It had some grapefruit peel as well. The taste had some mustiness to it, I’m assuming from the addition of Brett. It had light tartness and orange and grapefruit peel. This was a beer that let the hops shine through rather than the wild bugs. It had a thin body with high carbonation. The finish was quick, dry and musty with some citrus tartness, like an unripe orange. The beer was very easy to drink and given the low ABV, I could have put a few back without an issue. I would definitely have this one again, even though I didn’t pick up any of the tropical aspects of the beer.