The second brew of the night. I’m watching Chopped on the Food Network. I’ve never seen an episode where they use the same protein in the first two courses (in this case, they’re using duck). I love duck, but in both the appetizer and the entree? It may be a little too much…but who am I to criticize? So, this is my first brew from The Porterhouse Brewing Company in Dublin, Ireland. I love the bottle cap on this brew. It has a cute little ring attached to it. I haven’t had an oyster stout in awhile, so maybe I’ll enjoy this one more… 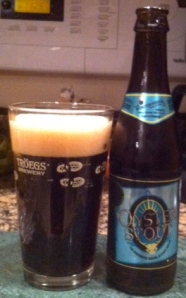 Trivia: According to the brewery website, “Rapidly becoming our best selling stout. A superbly balanced brew, smooth and rounded without being bland. More sweetness derived from fresh oysters shucked into the conditioning tank, what a way to go! But of course not suitable for vegetarians.”

Random: I have never tried an oyster, but I can’t get past the consistency.

This brew poured with a thick, tan-colored head that dissipated slowly and left lots of lacing on the glass. The body was a dark brown color with no visible carbonation due to the color. The nose had roasted malts, coffee and a bit of brine, which I assume was from the oysters. The taste was almost exactly the same as the nose, except that the brine was a bit more pronounced. There was also some earthiness. I really enjoyed how the roasted malts took center stage and the brine wasn’t as intense as other oyster stouts that I had. The finish was long with the same roasted malts in the taste. I’m shocked to say this, but I actually enjoyed this stout a lot. I would definitely have this again. If you see this one, definitely pick it up.