I have become a “Real Housewives” fan. I normally hate trashy television, but this is so dramatic that it cracks me up. My favorite is Erika from the Beverly Hills edition. She is so blunt and so real that it’s amazing. This has no relation to the beer, but I just had to get it out there. 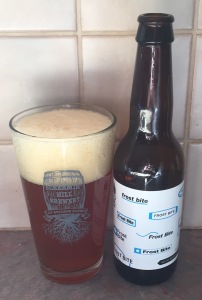 Trivia: According to Sheltonbrothers.com, “This american pale ale brewed with orange peel and pine needles is so frosty that it needs to be stored cold and may bite if you touch it. This beer is all about the balance (not the bass). Imagine the flavours of pine needles and orange peel. Now imagine the same flavours only represented by Aurora, Citra, Tettnanger, Simcoe and Amarillo hops. This hoppy dry mix of spices and hops makes for the perfect Winter American Style Pale Ale.”

Random: I will say, there is a lot of yelling on the show, which Val isn’t the biggest fan of.

This brew poured with a thick, three finger, ecru colored head. It took a long time to dissipated and left generous lacing on the glass. The body was slightly hazy and bright orange in color. There was some carbonation visible. The nose was on the milder side. It had musty pine needles and orange. Malt was present as well, but manifested more like biscuit instead of sweetness. The taste had pine needles as well, and the same musty note. It had orange oil as well. Malt made an appearance, and again, was more like biscuit or cracker than overly sweet. The body was thick and alcohol was hidden. It had a lengthy finish with pine. I thought this beer was alright, but nothing special, especially for $8 a bottle ($.67 per ounce).

Happy Saturday! There’s not much going on here, but at least baseball is back. I know my team will be terrible again this year, but hopefully we rebuild a bit. This beer is one I picked up at Half Time and had absolutely no prior knowledge about.

Trivia: According to sheltonbrothers.com, “This is it! The sequel to the hop success of First Frontier. This beer is the final in every way. We recommend it as the final of your evening! This is an extremely potent and yet well balanced Double India Pale Ale. This beer is well suited in extreme environments, whether it be Siberian winter, Volcano eruptions on Java, Danish earthquakes (They exist!) or rush hour. This beer is seeking out frontiers and built for the test.”

Random: If the beer was in volcano eruption, wouldn’t the glass melt?

This beer poured with a pillowy, three finger, tan head that dissipated slowly. It left a lot of lacing on the glass. The body was darker than I expected for the style. It was a deep mahogany color with some haziness. There was light carbonation as well. The nose was incredibly sweet. It had caramel and toffee. It had earthy, piney hops as well. There was some astringency from the alcohol too. The taste was much softer than I expected, given the nose. It had the same caramel/toffee sweetness and bread. It went into grapefruit pith and herbal notes. Warming alcohol came through next. I think this may have been an old bottle, because this drank more like an American Strong Ale. A lot of the hop flavor seemed to have mellowed out. The body was thick with light carbonation. It had a long and sweet, caramel malt finish. A bottle of this was expensive at $6.79 ($.62 per ounce), and I don’t think the price justifies the liquid in the bottle. This beer was good, but it was just too sweet for me, given the style. I wouldn’t have it again.

Last night’s beer was this offering from a gypsy brewer in Denmark. Let’s see how it went.

Trivia: According to the brewery website, “We bring you a black, thick, milk stout called By Udder Means. We wanted to do a stout that had a thick mouth feel and still a low alcohol percentage. We obtained this by adding a solid amount of lactose in the beer. The yeast strain we used is not capable of fermenting lactose, so when the beer stops fermenting all lactose still remains in the beer. At the same time, lactose doesn’t leave this sweet touch to the beer, so you can obtain a thick mouth feel without having an overly sweet or overly strong stout. We hope you enjoy.”

Random: This was brewed at De Proef Brouwerij, Lochristi-Hijfte, Belgium.

This beer poured with a three finger, light brown head that dissipated slowly and left a lot of spider web lacing on the glass. The body was black with no visible carbonation. The nose had roasted malts and lactose. After a few sniffs, I picked up smoke. The taste wasn’t like the typical milk stout. It had a lot of smoke, dark chocolate bitterness and burnt coffee beans. There was a touch of lactose present as well. The body was thick with light carbonation. It had a long finish with smoke. This was an expensive beer at $7.29 for the bottle ($.61 per ounce). Despite the price, this beer was really flavorful and a unique take on a milk stout. I would have this again, if not for the price.

I’ve been trying to drink more beers that aren’t American. It’s hard, especially since so many beers from the US are so tasty. This beer caught my eye on the shelf (mostly due to the profanity). I’m shocked that it got label approval. When I cracked it open, I didn’t even know what style of beer it was, so here goes nothing.

Trivia: According to the brewery website, “F^&* Art – This is Advertising which is a 11.3% quuuuuuuuaaaaadrubel packed with hops to balance the usually sweeter beer. The yeast gives notes of acidic apples, which blends well together with the hops.”

Random: I thought the squirrel on the label was cute.

This beer poured with a three finger, tan head that dissipated slowly and left lots lacing on the glass. The body was a dark brown color that was slightly cloudy. Despite this and the dark color, there was still some carbonation visible. The nose had dark fruit (specifically raisins) with Belgian yeast. Booze was there too with some apples and a touch of hops. The taste was smooth with raisins, plums and yeast. There was still an apple note, although the hops got a bit lost in the dark fruit (whcih wasn’t a bad thing). The body was very thick and chewy with high carbonation. This beer didn’t drink nearly as high as the ABV. The finish was lengthy and filled with currants and raisins. This was an expensive beer at $19.99 for the bomber ($.91 per ounce). Even though it was pricy, I thoroughly enjoyed the beer and would have it again.

I’ve almost purchased this beer a few times at the store. I haven’t heard much about it, but it looked interesting and I can really get down with a good porter. Let’s see how it was. 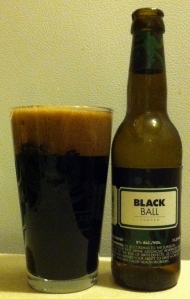 Trivia: According to the brewery website, “Black Ball is a potent porter, boasted with dark cassonade sugar and a good heap of American hops to rebalance the edgy and full-flavoured malt profile. You will find notes of chocolate, caramel and sulphur. This results in a porter with a broad and delicate mouth feel, capable of a good kick and does not leave the mouth voluntarily. Black IPA? No way! Hoppy Porters is here to stay! For a perfect evening, Black Ball blends perfect with a Black Rocket from the Pivovar Matuška brewery and Mikkeller Black Hole (Royalties to Theis!)”

Random: I have a basil plant on the balcony and it has been looking really sad. I watered it yesterday and it’s starting to perk up.

This brew poured with a two finger, relatively thick tan head that dissipated slowly. It left some lacing on the glass, but not as much as I would have thought. The body was almost black with no visible carbonation due to the color. There was a bit of tan-colored detritus throughout the body. The nose was fragrant with dark chocolate, roasted malt and peat and smoke coming through as well. The taste was more intense than I expected. I got coffee and roasted malts with lots of smoke and burnt chocolate as well. There was some alcohol burn at the end of the sip as well. The body was thick with light carbonation. The finish was long and smoky with smoke and chocolate. This brew was really well done and I would definitely have this one again.