At least it’s Thursday, almost Friday. Today was another busy day at work and it almost felt like Friday. I skipped the gym (I know, I shouldn’t have, but I was dripping sweat at work) and came straight home. I did my usual chores and then I went through my list of “Reviewed Beers” and fixed all of the broken links. I honestly had no idea that so many of them weren’t working. I’m going to have to start checking the new ones once a month or something. But, either way, it’s all fixed, so I feel like I accomplished something. Now, for another brew from the Massachusetts stash. 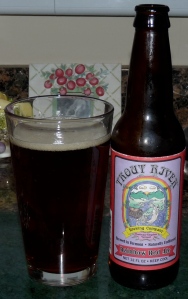 Trivia: According to wikipedia, “Trout River Brewing is a microbrewery located in Lyndonville, Vermont. It began production in July 1996, and currently brews a limited number of beers. It is the only brewery operating in Vermont’s rural Northeast Kingdom. Its beer is distributed primarily in the state of Vermont, in bottles, on tap, and in growlers from the brewery.”

Random: Wikipedia currently lists them as having 4 active beers. I’m glad I at least got to try a beer from this brewery, since it seems like distributing is so limited.

First of all, the label from this brew looked like a throwback to the 1980s. Anyways, the brew poured more of a mahogany brown color instead of a red. The head was about half a finger tall and pure white, but dissipated really quickly with no lacing on the glass. There was also moderate carbonation on the brew. The nose was pretty subtle, with a hint of nutty malts and not much else. On the first sip, I really don’t know what to make of this beer. The body itself was slightly under carbonated and watery for my tastes. I also got some notes of bready malt with a hint of caramel. I really didn’t get any sort of hops to this brew at all. The only other note that I got was a slight hint of nutmeg after searching for awhile. The finish was quick and malty. Although this brew is drinkable, it was really too thin and was flat-out boring for my taste. I wouldn’t search this brew out. Maybe their other offerings are better.