This was a beer that I tried at Memphis Taproom, which could be my favorite beer bar in Philly. The service is always solid and the food is amazing. If you find yourself in the area, it’s one of the few places that I could highly recommend, especially because of the smoked coconut club. It was featured on “Diners, Drive-Ins and Dives” and is one of the best sandwiches I have ever had. The sandwich is completely vegan and the smoked coconut reminds me of bacon. 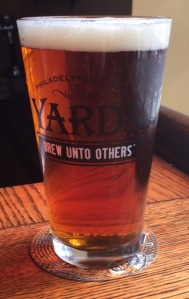 Trivia: According to the brewery website, “Imported German malts give this Fest Bier a chestnut red color. Nice aromas of toasted grains with a crisp, crackery malt flavor which is balanced by imported German noble hops. Smooth and highly drinkable.”

Random: This beer comes in at 25 IBUs.

The beer poured with a huge, three finger, cream-colored head. It hung around for awhile and left some lacing on the glass. The body was clear and a warm orange color with moderate carbonation visible. The nose was filled with grain and some brown bread and malt sweetness. The taste started with brown bread and quickly went into a grainy sweetness. There was some apple peel apparent as well. The body was on the lighter side of the style with lots of carbonation. It had a quick finish with sweet grain. This beer didn’t pull any punches, but went down easily and would pair well with food. It’s worth a shot.

Tonight’s selection is a beer that Val picked out. She loves the UFO series and tries everything they put out. They were also the series of beers that I cut my teeth on when I started the blog, so anything from the series brings me back about 8 years. I’ve never had anything that I can recall offhand with huckleberries, so I was very interested to see how this beer was.

Trivia: There is absolutely no information about this beer on the website except that you can use it to make huckleberry pancakes.

Random: The weather here is absolutely atrocious. I feel like all it does is rain and everywhere is flooding, especially by my job.

This beer poured with a two finger, pure white head. It dissipated slowly and left some lacing on the glass. The body was cloudy and bright yellow with moderate carbonation visible. The nose had some blackberries and huckleberries along with an almost vinous currant note. There was some toasted wheat as well as a touch of spice. The taste started with some berry sweetness. I specifically picked up blackberries and blueberries. It had a slight sweetness after the berry note and went into wheat. The body was on the heavier side than I’m used to for this series, but it had enough carbonation to make up for it. The finish was lengthy and had some berry sweetness. A single bottle was $1.92, which came to $.16 per ounce. This wasn’t a big favorite of mine and I wouldn’t revisit it.

Tonight’s beer is one that I picked up on a whim, mostly because I love Allagash beers. 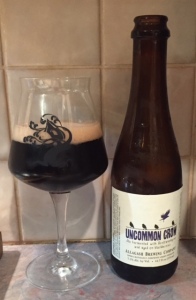 Trivia: According to the brewery website, “This beer was inspired by the common American crow’s love for blackberries. Uncommon Crow’s aromas of dark chocolate and cherries bloom into big blackberry flavor and a slightly tart finish. We brew this beer with 2-row barley, Midnight wheat, raw wheat, and rye malt, before adding a blend of Perle, Glacier, and Simcoe hops. The beer is fermented exclusively with our house strain of local Brettanomyces yeast. After six months in a stainless tank we add local blackberries. Like its namesake, Uncommon Crow carries a dusky hue. Over the following five months, Uncommon Crow continues to ferment and develops its luscious, uncommon flavors.”

Random: This beer is available in bottles and on draft.

This beer poured with a one finger, light tan head. It dissipated quickly, but left some lacing on the glass. The body was dark brown with moderate carbonation visible. The nose was filled with crushed blackberries and blueberries along with lots of funk. The taste also had a lot of blackberry and blueberry along with some white vinegar and funk. There were some notes of green apple as well. The booze was apparent on this beer, but overall the body was on the medium thickness side with a lot of carbonation. The finish was lengthy and tart. I picked this bottle up for $12.99, which was definitely expensive at $1.01 per ounce. I’m glad that I got to try this one, but it’s not worth the price tag.

This beer was one that I was excited to crack open. I love Night Shift beers and the packaging is on point.

Trivia: According to the brewery website, “Our house double IPA, The 87, has a piece of NSB history in its moniker. Named for our home at 87 Santilli Highway in Everett, this luscious hop bomb is wonderfully drinkable even with a little extra ABV. The 87’s hop profile marries traditional American varietals with some exciting, newer hops. After a few iterations, we’re pretty dang happy with the recipe. Long-time Night Shift fans may remember the days when we packaged this beer in 750ml bottles. Once cans were in the mix, we knew The 87 was destined for a 4-pack. These tall boys are available year-round at our Taproom, and if you grab a glass at the bar, you can officially drink The 87 at 87.”

The beer poured with a half a finger of thick, pure white head. It dissipated slowly and left a lot of lacing on the glass. The body was incredibly hazy and lemon yellow in color. Because of the cloudiness, there was no visible carbonation, but there were some floaties in the beer. The nose started with some light mango notes along with grapefruit segments and grapefruit zest. There was some malt at the end. The taste was very citrusy and bright. It had grass, but quickly transitioned into mango along with grapefruit segments and Spring flowers. There was very little malt to this beer and the booze made an appearance at the end of the sip as well. The body was on the lighter side for a double IPA and had lots of carbonation. It had a lengthy finish with flowers. Val picked this up for me on a trip to New York, so I have no idea how much it was, but this was a solid beer that would pair well with food or would be a great standalone. This is worth searching out.

Tonight’s beer is one that I’ve never seen on shelves before and I’ve really been searching out pilsners. Let’s see how this one was.

Trivia: According to the brewery website, “Inspired by classic European lagers, our entire Brewing Team got together to create this truly collaborative beer that captures the essence of European tradition. The result, Spezial Pils, is our take on a German-style pilsner with a pleasant balance between light, grainy malt and spicy, floral hops. We lager it at freezing temperatures for an extended period to round out its delicate flavors and improve drinkability. The finish is crisp and clean with a pleasant dryness and subtle bitterness. Prost!”

Random: I’m really into pilsners lately and it’s definitely getting to be the season for them.

This beer poured with a thick, one and a half finger, off white head. It dissipated slowly and left some lacing on the glass. The body was a clear, straw yellow color. The nose was relatively mild with grass and some lemon zest as well. The taste was equally mild. It had some mineral water with grass and lemon zest along with some sweet malt at the end. The body was on the lighter side with high amounts of carbonation. The finish was quick with malt. A can of this was $2.00, which broke down to $.17 per ounce. This was a pils that didn’t pull any punches, but I wouldn’t refuse at a party. Give it a try if you see it.

I’ve gotten very behind on posting due to my work schedule. So, hopefully I can get a few posts done tonight.

Trivia: According to the brewery website, “Come one come all, Welcome to the Bloody Show
A collaboration beer between Mikkeller and Against the Grain Brewery. Simply a Blood Orange Pilsner. Brewed with German Pilsner and munich malts, hopped with American Citra, Columbus, Amarillo and Czech Saaz and fermented with Danish lager yeast. Then we added the zest and juice from a shit-ton of blood oranges. The result is a nice easy drinking lager that exhibits a tart and citrusy aroma and flavor.”

Random: I loved playing the Friday the 13th NES game, but was never very good at it.

The beer poured with a one finger, white head. It dissipated quickly, but left some lacing on the glass. The body was slightly hazy and bright orange in color. There was moderate carbonation visible. The nose was not as fragrant as I expected. There was some orange peel and a lot of malt, but nothing that I could specifically discern as blood orange. The taste had slightly more orange flavor, but not much. I picked up orange zest and orange oil and it quickly went into malt. The body was on the lighter side with a lot of carbonation. The finish was quick with orange peel. A can of this was $3.75, which came to $.23 per ounce. I really wanted to like this beer, but it was a bit disappointing. I won’t be rushing to have this again.

Tonight’s beer is a new take on an old standard from 21st Amendment. The original beer is one that I had years ago, so I was interested on this one. 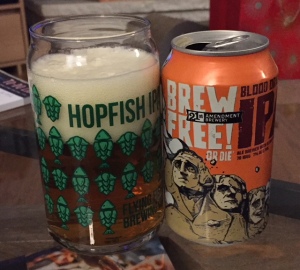 Trivia: According to the brewery website, “Four hop varieties and seven blood oranges ago, our founders brought forth in this brewery, a new beer, conceived in Liberty, and dedicated to the proposition that not all IPAs are created equal. Because sometimes, real fruit just makes things even more delicious. Blood Orange Brew Free! is brewed like our original west coast style Brew Free! or Die IPA, but with an abundance of fresh blood orange puree and a twist of citrusy dry hops. Refreshingly different. As Abe would say, ‘Whatever you are, be a good one.'”

Random: Fruited IPAs are the new thing. I’m curious to see what the next craze is.

This brew poured with a two and a half finger, slightly off-white head. It dissipated at a moderate pace, but left some lacing on the glass. The body was mostly clear and had a lot of carbonation visible. The nose was disappointing. It started with oranges and lemon zest and then went into grapefruit. I didn’t pick up any blood oranges. There was some pine as well. The taste was better than the nose. It had some pine notes and quickly transitioned into orange juice and grapefruit zest. There was a little bit of blood orange, but not nearly as much as I would have liked. A can of this was $1.67, which came to $.14 per ounce. This beer was a miss for me. I won’t be having it again.