Happy St. Patrick’s Day! What am I doing today? Updating the beer blog, that’s for sure. Other than that, probably going out to dinner and having a few brews with my sister. It’s a pretty relaxing Sunday, which I’m always down for. Today is also my Saturday, so it’s a nice way to relax after a week at work. I usually don’t do Irish food on St. Patrick’s Day, plus I’m craving a steak. Anyways, onto a beer that is not readily available in New Jersey (yet). I’ve had only one other offering from High & Mighty, their XPA which was an Extra Pale Ale that I thought was okay. Let’s see how this one goes. 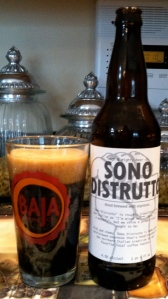 Trivia: This translates from Italian to “I’m exhausted.”

Random: I’m watching a documentary on stress and it’s quite interesting. Well, except for the fact that it basically says that stress is going to kill you. That part is not so much fun.

This brew poured with a three finger, thick tan head that took forever to dissipated and left no lacing on the glass. The body was a dark brown color with lots of bubble adhering to the glass but no visible carbonation. The nose was roasted malts and bitter espresso which was really nice. I also got a very odd touch of mint. The taste was sour with a touch of old coffee. Flat out awful. I got some roasted malts as well, but the odd placed sourness made the whole brew bad. I wish the taste was exactly like the nose and it would have been spot on.

After having a beer that was slightly disappointing, I think I can justify cracking open another one. I also just finished watching an episode of “Best Thing I Ever Ate.” It is easily my favorite show on tv. I love watching people who obviously love food talk about it and show where to go for these things. Again, I wish that was my life. So, now that I’ve been sufficiently distracted, this is another beer from the road trip. I never heard of them before, so I figured I should grab one of their pale ales. 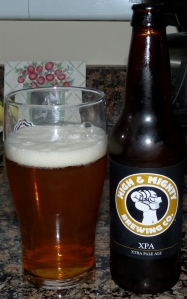 Trivia: According to the brewery website, “XPA (Xtra Pale Ale) is an American classic. This hoppy, golden session ale is exceedingly drinkable but is packed with flavor. Old world English malts are paired with new American hop varieties, resulting in easy- to-drink yet complex brew, ideal for evenings out at the pub or when entertaining at home. This ale has it all- loads of hops to satisfy the most serious hophead, but enough malt to achieve a perfect balance.”

Random: I really like Diners, Drive Ins and Dives, but I can’t stand the host. Anyone could do that show. Like me…especially if it involved beer. Moving on…

This brew poured a slightly hazy orange color with a lot of visible carbonation. The other interesting thing about this brew was that it had visible sediment in it. This bad boy was topped off with a finger of pure white head that dissipated and left some lacing on my imperial pint glass. The nose had hints of citrus, grass and little bit of flowers. The taste had much of the same notes in the nose. I got a bit of hops, albeit they didn’t take over the flavor. Citrus came out with some grass that ends with a hint of caramel malt. The brew was on the thinner side and the carbonation was definitely active, which worked really well for this beer. I could see throwing a few of these back on a hot summer day. The finish was a little bit bitter, but quick. I wouldn’t have pegged this brew as a pale ale though. I saw a few people call this English style and I could easily see that as the bitterness isn’t intense and is backed up by malt. This was an easy to drink beer, but I couldn’t see seeking this out. But, it’s still worth a shot.