Sometimes Kate decides to cook with beer. On one of these days, I requested a German meal. For some reason, I absolutely love German food, but Kate never cooked it before. She ended up making bratwurst, soaked in Guinness with a bunch of other German sides. Needless to say, the meal was amazing. I took one of the leftover Guinness bottles to review.

Trivia: According to the brewery website, “This is it, the one that started it all. Crafted to perfection for over 200 years, GUINNESS® EXTRA STOUT is descended from the definitive West India Porter known as Extra Superior Porter. Crack it open, and the first sip tastes as fresh as ever. The unmistakeable deep-dark color, the crisp hint of roasted barley, the fresh breeze of hops, and the refreshing bite all make for the bittersweet reward. Pure beauty. Pure GUINNESS®.”

Random: I will always have a soft spot in my heart for Guinness.

This poured with a three finger, thick, tan-colored head that took forever to dissipate. It left lots of lacing on the glass. The body was black and impossible to see the carbonation due to the color. The nose had a sweet, almost lactose quality to it. It also had roasted malt and light chocolate. The taste had a mineral quality that wasn’t present in the draft version. I also got coffee and milk chocolate. The end of the sip goes towards a slightly abrupt bitter taste. The body was watery with high carbonation. The finish was long with roasted malts. Although this brew is okay, the nitro versions of Guinness draft that I’ve had blow it out of the water.

The last beer of the Irish six-pack. Harp is a beer that I’ve had on multiple occasions, albeit not in a very long time. I had it when I was in Ireland, and the locals would say that this was made for the Americans to drink. If they wanted something lighter than Guinness, they’d drink Smithwicks or Budweiser. But, I drank it just the same. I even used to look for it when I went out, simply because it was an Irish beer. I don’t think I ever thought that it was fantastic though. It’s also brewed by Guinness and has the classic Irish “harp” on the label.

Trivia: According to wikipedia.com, “Harp Lager was first produced in 1960 as a bottled beer by the Guinness company (now Diageo), in response to the trend among drinkers in Britain and Ireland towards continental lager. Guinness converted its Dundalk brewery into a modern lager production plant with the guidance of Dr. Herman Muender, a distinguished German brewer. Various names were considered for the brand, including Atlas, Cresta and Dolphin, before Harp was chosen. The brand was marketed with the Brian Boru harp as its emblem. The manufacturer states that Harp is made with pure water from the Cooley Mountains, Dundalk.”

Random: At one point, I considered getting a tattoo of the Irish harp. Then, I actually saw it on someone and didn’t really like it and decided otherwise. I have a claddagh instead.

This brew poured with a half a finger of white head that dissipated quickly and left no lacing on the glass. The body was a clear straw yellow color with a large amount of carbonation. The nose smelled a lot like a macro with some corn and sweetness from the malt. The taste was actually not as bad as I expected given the style. The sweetness was toned down a bit with some bitterness to it and a bit of grain. It was pretty unoffensive, actually. The thin body with lots of carbonation made it very crisp as well.The finish was quick with a hint of bitterness. Honestly, although I’m not a huge fan of the style, I’d take this one over a macro any day. Not bad!

It’s finally the weekend! It was definitely a long week and one that I’m happy to see end. And, tomorrow’s St. Patrick’s Day. I really can’t say no to a holiday that encourages Irish food and drinking. We’re finally down to the final two Irish themed beers, and we’re getting into the ones that are actually from Ireland. Guinness Black Lager is a relatively new brew that has gotten a lot of press. I like to try anything Guinness, so I knew it wouldn’t be long before I got my hands on this one. 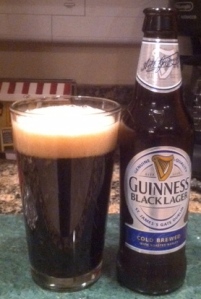 Trivia: According to wikipedia.com, “The purpose of the new product is to create new income. It is aimed at young men who prefer chilled, bottled lagers to pints of beer, and is being sold in 330 millilitre bottles for six to nine months in Northern Ireland, as a test market for Europe, and in Malaysia to see whether there are opportunities for the product elsewhere. In Malaysia, the beer will be known as Guinness Premium Beer. It will be offered at a comparable price to other premium lagers. The move follows previous attempts by Diageo to boost sales by introducing variations of Guinness stout.”

Random: I’m digging the silver and blue label of this one. It has the classic marks of Guinness while adding a new twist to it.

This poured with a thick, two finger tan head that dissipated slowly and left some lacing on the glass. The body was a dark brown, almost black color with moderate visible carbonation. The nose was more subtle than I expected. It had some roasted malt and coffee, not much else to it. The taste was not at all what I was expecting. It was pretty bland to start, with very light roasted malt flavoring. There was also light bitterness to the brew. I can’t believe how boring this beer was, especially given how flavorful I find Guinness to be. The finish was quick with nothing to it. I wouldn’t have this beer again…a real disappointment.

Over the weekend, I hit up an Irish pub with my sister in Bordentown. They actually have a decent beer selection and the food is really, really good. After I took a look at the menu, I saw this offering and honestly, I had never heard of it before. So, I figured, why not give it a try?

Trivia: According to wikipedia.com, “Kilkenny is a nitrogenated Irish cream ale from the makers of Guinness, which originated in Kilkenny, Ireland. The brand is managed and produced by Diageo. It is available in draught and cans. It is brewed in Ireland and its heritage dates back to the 14th century. Kilkenny is similar to Smithwick’s Draught; however, has less hop finish and it has a nitrogenated cream head similar to Guinness. The ‘Kilkenny’ name was originally used during the 1980s and 1990s to market a stronger version of Smithwick’s for the European and Canadian market due to difficulty in pronunciation of the word ‘Smithwick’s’. It now refers to a similar yet distinct beer.”

Random: For some reason, I wasn’t surprised that this was brewed by Guinness. It’s probably because of the head.

The brew poured with a thick, one finger, white head on a clear, dark brown body. The head reminded me a lot of Guinness. But, unlike Guinness, there wasn’t much to the nose, perhaps a little bit of malt? On the first sip, the head (which I also managed to get on my nose, smooth, I know) tasted exactly like Guinness. The taste itself was light, yet creamy, with little carbonation on a thin body. There was a hint of bitterness that lasted until the finish. But, honestly, very little flavor on this brew for me. It was mediocre at best. I wouldn’t have this again.

I’ve had a few of these in the fridge for awhile. For me, Guinness is a classic beer. My ancestry is partially Irish, so when I was younger, I felt a need to drink Guinness. I went to Ireland twice and tried Guinness Extra Cold, which I remember really enjoying. Every time I drink Guinness, it reminds me of having a beer in a pub in Ireland. But, I haven’t had one in awhile, probably a few months, nor have I really analyzed one. So, I’ll put the nostalgia aside, and here we go…

Random: The thing in the bottom of the nitro bottle is called a “rocket widget.”

I let the brew warm up for a minute, given that Guinness is supposedly best served at 43 degrees. Normal fridges run around 38 degrees, so a few minutes, given the weather should bring it to optimal temperature. Since this is a nitro-bottle of Guinness, I’ll be drink straight out of the bottle, so no comments on color or head. But, I think everyone has an idea of the inky black color with the creamy off white head that comes with a Guinness. In the bottle, it’s a little more difficult to get scents, but I get a hint of dark chocolate. The taste is a bit watery, with some roasted malts. The finish is a slight bit bitter. There is also a bit of carbonation to it. I also get some chocolate on the taste. The nitro bottles are okay, but to me, nothing beats a Guinness on tap. Guinness is a staple beer in most bars. The history behind it, and for me, the nostalgia, make me have a special spot for it in my heart. But, not the best stout that I’ve ever had and not really comparable to Guinness on draft.