I’m back to working out, which means that the next few days are going to result in some pretty major soreness. I have an exercise bike in my basement and the first few days I use it always result in sore feet and thighs. A beer should make them feel slightly better. 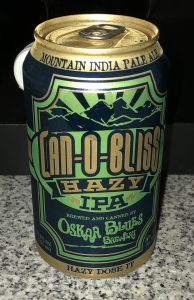 Trivia: According to wikipedia.com, “Oskar Blues Brewery is a craft brewery with locations in Longmont, Colorado, Brevard, North Carolina, and Austin, Texas. The company began as a brewpub in Lyons in 1997 and began brewing beer in the basement in 1999. In 2002, they became one of the first to put their own craft beer in cans. In 2012, they began marketing some of their craft beer in resealable aluminum containers, and in 2012, they expanded and established another brewery in Brevard, North Carolina.”

Random: I had no idea that this was part of a rotating series of beers.

The beer poured with a two finger, white head that dissipated at a moderate pace. It left some lacing on the glass. The body was hazy and yellow in color. Despite the haze, there was some carbonation visible. The nose had the expected tropical fruit note, which included guava and mango. There was also an earthy malt note that backed it up. The taste was similar to the nose with some toasted pine nuts, tropical fruit and earthy malt. There was some alcohol that was noticeable as well and dried the beer out. The body was on the medium side with just enough carbonation. It had a quick finish with tropical fruit. I thought this beer was alright, but I don’t feel the need to have it again.

We had a few friends over for New Year’s Eve (luckily, early in the night, since I was so exhausted from work that I didn’t make it until midnight). One of them is really into craft beer, so I opened this to split with him. Let’s see how it was. 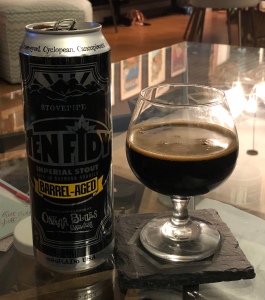 Trivia: According to the brewery website, “Aged through four seasons and from a blend of the top Bourbons around, this Ten Fidy has morphed into a monster of cranked up flavor. Espresso, burnt sugar, rich chocolate, caramel notes are now driving alongside the vanilla, oak, bourbon from the barrel and been smoothed out during maturation. Even at 12.9% (75 IBUs) it is cool and drinkable, letting each sip add more and more complexity.”

Random: This can was a very odd shape.

This beer poured with a one finger, light brown head. It dissipated quickly and left very little lacing on the glass. The body was black with no visible carbonation. The nose was filled with roasted malts, bourbon and burnt brown sugar and a nice espresso. The booze wasn’t apparent on the nose. The taste was really complex. It started with the expected roasted malts and dark chocolate. It went into bourbon, vanilla, molasses and some caramel. The booze made an appearance at the back of the throat. The body was thick and chewy with light carbonation. It had a lengthy and sticky finish with bourbon. I enjoyed this beer a lot, although it would have been rough to kill the can by myself.

I’ve been walking a lot more at work and my feet are really sore. I used to get the gel inserts because I walked a lot. I think I need to get new ones and that should help. Tonight’s beer is one that I was really interested to try. Let’s see how it was. 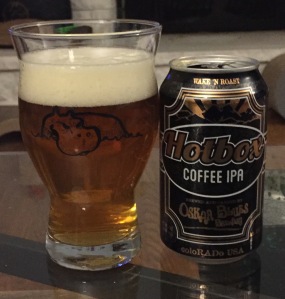 Trivia: According to the brewery website, “An odd couple can make for some of the most incredibly unique tastiness. Take Hotbox Coffee IPA (7.2% ABV, 70 IBUs) for example – a piney, citrus, mango, Simcoe-hopped IPA and an infusion of cold brew extract made with Hotbox Roasters’ Ethiopian beans poppin’ with creamy blueberry and cacao notes.”

Random: This beer comes in at 70 IBUs.

The brew poured with a one finger, white head that was incredibly thick. It took forever to go away. The body was amber in color and slightly cloudy with a lot of carbonation visible, despite the haziness. The nose was light coffee that paired with pine. It had some blueberry and mango notes at the end. The taste was an interesting amalgam of cold brew coffee, blueberry and citrus. It had a touch of smoke along with unripe mango flesh at the end. The booze was completely hidden. It had a light body with generous carbonation. The finish was quick with blueberry and coffee. I picked this up awhile ago, so I’m not sure how much I paid for it. I enjoyed this beer a lot, especially the uniqueness of the blueberry flavor. Give this one a shot if it comes out again.

Every Christmas, my sister makes macaroons. One year, she left some out and I tried them. She didn’t tell me that there was wax paper on the bottom of them and they were incredibly chewy. Needless to say, now I always check the bottom of them before I try them. 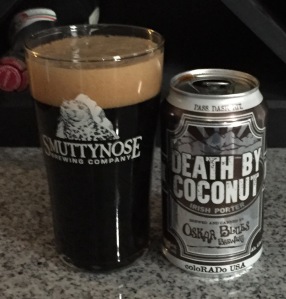 Trivia: According to the brewery website, “Intense pure liquid cacao flavors swirl with popping coconut aromas, all supported by a semi-sweet porter made from loads of our dark chocolate and extra dark caramel malt. This limited release specialty comes around once a year to satisfy that sweet tooth, so get ’em while you can before they disappear. At 6.5% ABV and 25 IBUs, this choconut goodness will have you yellin’ ‘Pass. Dash. Hit.’ all winter long.”

Random: Val is not a big fan of coconut.

This beer poured with a two finger, light brown and fluffy head. It was slow to dissipate and left a lot of lacing on the glass. The body was black with no visible carbonation. The nose was a combination of smoke, chocolate and toasted coconut. It reminded me of that coconut and chocolate Girl Scout cookie. The taste had coconut water and roasted coconut up front. It quickly went into ash, smoke, dark chocolate and even a little peat. Roasted malts were present as well. The body was thick with lots of carbonation as well. It had a lengthy finish with chocolate and toasted coconut. A can of this was $3.25, which came to $.27 per ounce. I enjoyed this beer a lot, but if you’re not a fan of coconut, this isn’t a beer for you.

This was another beer that I grabbed from the cold case of the craft beer bar. It didn’t come highly recommended, but I was curious about this one and cracked it open in the hotel. Let’s see how it was. 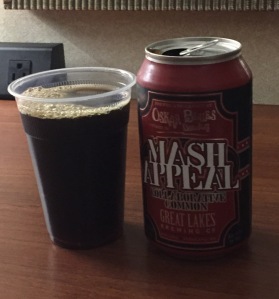 Trivia: According to the brewery website, “In celebration of Cleveland Beer Week, we’ve partnered with Oskar Blues Brewery and Lagerheads Brewing Company to create Mash Appeal, a Kentucky Common-style lager. Inspired by a once popular pre-prohibition style established in Louisville, Kentucky, Mash Appeal has a rich malt flavor with a tart finish.”

Random: This beer comes in at 19 IBUs.

The beer poured with a quarter finger of light brown head. It dissipated almost instantly and left no lacing on the plastic cup. The body was a very dark brown with some carbonation visible. The nose had some caramel malt along with diluted pine cleaner. There were also notes of dark molasses. The taste was unlike any beer of the style that I’ve had. It had a certain rye note along with a lot of sweetness from the caramel malt. It had chocolate and some smoke too. The body was on thicker side with a decent amount of carbonation. It had a lengthy finish with syrupy sweetness. I was not a fan of this beer at all. The flavors just didn’t work together for me. This was a one-off collaboration with Great Lakes, so I doubt I’ll see it again, but if I did, I wouldn’t grab this one.

It’s been a long time since I’ve had a Vienna Lager. The last one I had was from Neshaminy Creek and I really enjoyed it. Let’s see if I like this one better. 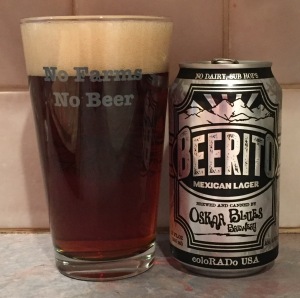 Trivia: According to the brewery website, “Beerito (4% ABV, 21 IBUs) is a light bodied, amber Mexican lager brewed with premium German and coloRADo sourced craft malts and featuring a crisp accent from noble hops. The mouth feel is incredibly smooth with flavors of walnut, toasted bread, plum, honey and cocoa – 4% ABV doesn’t always come with this kind of character.”

Random: I wish more breweries would do Vienna Lagers. I guess because of tank space, it’s cost prohibitive.

This beer poured with a thick, two finger, khaki-colored head. It took forever to dissipate and left a lot of lacing on the glass. The body was clear and sienna colored with lots of carbonation. The nose was really subtle with toasted malt and nuttiness and nothing else. I wish I could have picked up the cocoa and plum, but it just wasn’t there, even after I let it warm. The taste had slightly more depth with toasted malt, hazelnuts and a slight skunk note. The cocoa note was very light, but did come out. It drank way heavier than the ABV with a thick body. It did have a lot of carbonation to go along with it, which made it much easier to drink. The finish was swift and nutty with cocoa. This will run you about $2 a can ($.17 per ounce). I can see why they brewed this and I think this is a beer that I would be more impressed by if I paired it with food as opposed to reviewing by itself. I know what I’ll be having next time I get Mexican food.

Awhile back, we had a few people over for a barbecue and I wanted some canned offerings to drink while I was cooking. Oskar Blues had just put this beer out and I was really interested to try it. The can also looked a bit different from their other offerings. Let’s see how it went. 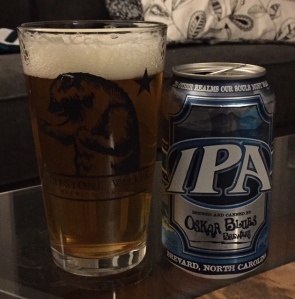 Trivia: According to the brewery website, “A Metamodern IPA conceived of hand selected hops from down under. Malt barley and red wheat combine to create a clean malt backbone with foolproof flavor and mouthfeel to support the main act of Enigma, Vic Secret, Ella, Topaz and Galaxy hops. The hops strum juicy and sweet aromas with headline notes of passion fruit, raspberries, pineapple and citrus. This straight-up strain is Oskar Blues IPA (6.43% ABV). To each their own til we go home.”

Random: Our one kitten loves to hunt and play and the other one just wants to snuggle.

This brew poured with a two and a half finger white, fluffy head. It dissipated slowly and left a lot of lacing on the glass. The body was a clear, straw yellow with moderate carbonation. The aroma had a lot of mango, pineapple and passionfruit. It had a touch of pine resin. The taste had a lot of tropical fruits as well and transitioned into pine resin. There was no malt to speak of. The body was light with moderate carbonation. The finish was quick with tropical fruit. This beer was $1.83 a can ($.15). It had nice flavor and went down easily. I would have it again.