It’s almost time for football season, which is my favorite time of the year. I hope that the Eagles can repeat, but I’m really just happy we got one Super Bowl last year. 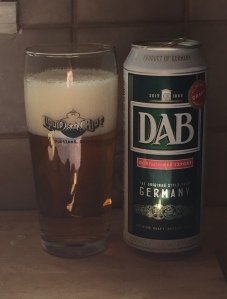 Trivia: According to the brewery website, “DAB is the ambassador of the famous Dortmund Beer style which is brewed in compliance with the German Beer Purity Law of 1516. Using only pure and natural ingredients, DAB is still brewed in Dortmund to original recipes. Over the last 150 years, DAB has become a world famous and international brand as well as a global symbol of German beer culture and a seal of quality. Grab your DAB in more than 40 countries!”

Random: It’s been awhile since I’ve had a dortmunder. They are a really good Summer beer.

The beer poured with a three finger, pure white head. It dissipated slowly and it left no lacing on the glass. There was a small crown that was left on top of the clear, straw-yellow body. There was light carbonation visible. The nose was filled with mineral water and river stones. There was grain as well. The taste started with grain and slight honey sweetness. It had a twang from the mineral water and river stones as well. The body was light with not enough carbonation. The finish was quick with mineral water. I picked the can up for $1.12, which came to $.09 per ounce. I thought this beer was lacking in flavor and was a bit unbalanced. I wouldn’t have this again.

I can’t wait for football season to start again. It’s my favorite sport and the Eagles are reigning champs. Hopefully, we have a repeat. 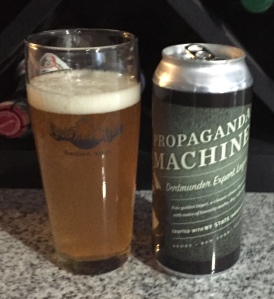 Trivia: According to the brewery website, “Kieran and Dave both have very strong ties to the Bronx. Kieran was born in the Woodlawn section of the Bronx, and returned to go Manhattan College, while Dave’s grandfather played football at Evander Childs HS, Dave’s mother grew up in Riverdale, and Dave spent all 13 years of grade and high school in the Bronx. After spending many years in the corporate world, Kieran and Dave decided it was time to start something more in line with their passions. Combining their love for craft beer, desire to create a thriving company, and a need to provide something better to the people, their vision for Gun Hill Brewing co. was born. Both are extremely proud to bring production brewing back to the borough.”

Random: This is my first beer from Gun Hill.

The beer poured with a thick, one finger, ecru colored head. It dissipated slowly, but left some lacing on the glass. The body was a bright yellow with moderate carbonation visible. The nose was rather mild with some yeast and white bread. There was a hint of floral hops in the background. The taste was more of the same. It had a prevalent yeast and white bread flavor. The floral hops were more pronounced than in the nose, but not by much. The body was light and crisp with enough carbonation to back it up. The finish had floral hops and yeast. This was a beer that I bought awhile back in New York, so I don’t recall how much it was, but don’t remember this being very expensive. I liked the beer, but it was relatively simple.

Val and I went to our favorite German place in Philly after looking for wedding rings. As usual, the food was amazing, but there was a cheerleading dinner there and the parents were incredibly loud and drunk, to the point that even the server was apologizing to us. This was the beer that I had while we ate. 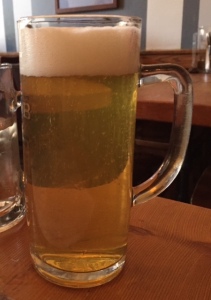 Trivia: According to the brewery website, “Quality alone isn’t everything…but everything is nothing without quality. For 400 years Hofbräuhaus Traunstein has made headlines with its full selection of beers in the highest quality. The finest malt from Bavarian malt houses, the purest water from our own mountain spring on the Traunsteiner Hochberg, and finally, flavour hops from our own hop fields in the Holledau. It goes without saying that Hofbräuhaus Traunstein strictly observes the Bavarian Beer Purity Law of 1516. Our beer is known to excel: Since taking gold in the 1975 world record for eight beers, Hofbräuhaus Traunstein has been awarded over 100 gold and silver medals by the DLG (the German Agricultural Society) as well as the gold European Beer Star. In 1982 Hofbräuhaus Traunstein became the first brewery in the world to offer draught weissbier. Yet the highest award is the praise of our customers, beer lovers and connoisseurs.”

Random: Even half liter glasses of beer are very heavy and the beer gets warm too quickly.

The beer poured with a huge, two finger, white head. It went away slowly and left a lot of lacing on the glass. It had a clear, yellow body with a lot of carbonation visible. The nose had grain, lemon and small amounts of honey. The taste was very grainy with lots of yeast. Honey came through at the end without much else. The taste was very light and simple. The body was thin with a lot of carbonation. It had a quick and sweet finish with honey. This beer paired well with the German food at Brauhaus Schmitz, but it didn’t have much depth to it.

It’s always sad to see a brewery close, especially because of a casino project. Casinos are a hop topic here in Jersey because Atlantic City is struggling and they are looking at opening a casino in the Meadowlands and say that it will help AC. I’m not a gambler, but I don’t understand how that makes sense. But, no matter…let’s see how this beer was. 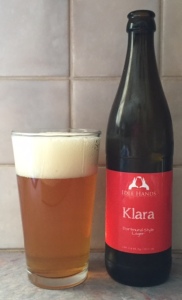 Trivia: According to the brewery website, “It is with a heavy heart that we announce the closing of our Everett, MA facility on June 27, 2015. We have been forced to close due to a sale of the building and land to the Wynn Everett Casino project…Suffice it to say, we may down but we are not out. Plans are in the making to re-emerge with a new facility somewhere in the Boston market and as soon as we have news to share, we will.”

Random: When Val and I went to AC for ACBF, we gambled a whopping $20 and she was not happy when we lost on slots.

This beer poured with a one finger, white head that dissipated quickly and left no lacing. The body was a clear, golden-yellow with high carbonation. The nose had notes of sweet grain and light fruit. The taste had sweet fruit followed by malt and some spicy hops at the end. It had a medium body with light carbonation. The finish was lengthy with spicy hops. Again, no comment on the price since this as a gift, but this was a solid beer from a style that I don’t tend to sample much (only twice in the history of the blog). But, this was quite enjoyable and I would have it again.

Great Lakes is finally in North Jersey! I was definitely excited to hear that news. I ended up going to Maloney’s one day after work and I didn’t know that it happened to be the release event for Great Lakes. It was also a keep the glass night, so I came home with the glass you see in the picture. So, without further ado… 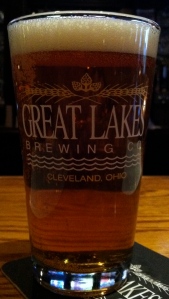 Trivia: According to the brewery website, “When we first started brewing Dortmunder Gold in 1988, he was a born crowd- pleaser. Not long after that, he became a judge- pleaser, collecting gold medals at multiple national beer festivals. But you’ll never hear our Dortmunder Gold brag. Much like his hometown of Cleveland, Dortmunder Gold has old-school working-class style with a new-school artisan pedigree. Perfectly comfortable attending your tailgate party and your work friend’s art show, you could say he’s a ‘well- balanced’ guy.”

I’ve been waiting to try this beer for awhile. It poured with a one finger white head that was decently thick and took awhile to dissipate. There was some lacing left on the glass as well. The body was a clear, straw yellow color with heavy carbonation visible throughout. The nose was clean with some straw and grass. The taste was pretty clean with grain and a grassy note at the end. There was a touch of hay too. The finish was quite long for the style with some grain. The body was light to medium with heavy carbonation.This was a simple beer but very well done. It was a very easy drinker that I would definitely have this again. Go grab one!

The last beer from my run of beers that I haven’t had before. For some reason, I tend to ignore German beers, and I don’t know why. Almost every time that I have one, I really enjoy them. I have to start forcing myself to get out of my “hoppy” comfort zone. This beer is a dortmunder/export lager, which should be a pale golden beer that is crisp with some biscuity malts. Let’s pop it open. 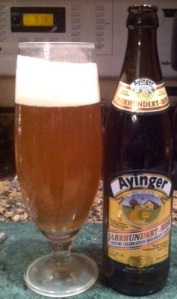 Trivia: According to the brewery website, “This beer was first brewed in 1978 to celebrate the 100th anniversary of our brewery. It has a golden-yellow color with a slightly flowery yeast, honey-ish aroma, tastes a little spicy and is full-bodied in initial taste, mild before swallowing and soft with a refined sparkle and fades with a well-balanced hint of bitterness. It is an especially drinkable and harmonious beer. Conrad Seidl, known as the Austrian ‘Pope of Beers,’ on the Jahrhundert-Bier: ‘It is a malty beer that pronounces the precious earthy quality of malted barley.'”

Random: The Rangers look nasty. Darvish is absolutely sick and the rest of their lineup is really impressive. I think they may be one of the nastier teams in the American League. I love watching their games.

This brew poured with a three finger white head that was incredibly thick and left lots of lacing on the glass. The body was a cloudy golden color with significant visible carbonation visible through the cloudiness. The nose was…interesting. There was a floral characteristic to it with pronounced biscuit. The taste was almost exactly what was on the nose. It had the interesting floral characteristic and biscuit. After a few sips, I couldn’t figure out if I liked it or not. It was definitely weird. The body was on the thicker side with moderate carbonation. The finish lingered with the floral notes. Although the brew was definitely different, I’m not sure that I liked it. I wouldn’t rush back to have it again.