One of the things on my bucket list is going to Oktoberfest in Germany. I’ve heard from people that it’s a lot of fun and a must-do for a beer nerd. I’ll get there eventually, until then, this will have to do. 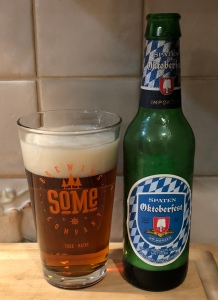 Trivia: According to wikipedia.com, “Märzen (or alternatively Maerzen) has its origins in Bavaria, probably before the 16th century. A Bavarian brewing ordinance decreed in 1553 that beer may be brewed only between 29 September and 23 April. The Märzen was brewed in March (März in German is ‘March’) with more hops and slightly higher alcohol content that would allow the beer to last while the brewing of new beer was forbidden from 24 April to 28 September. The original Märzen was described as ‘dark brown, full-bodied, and bitter’. The beer was often kept in the cellar until late in the summer, and remaining bottles were served at the Oktoberfest.”

Random: I can’t believe that this was the first time I had this beer.

The beer poured with a thick, two finger, tan head. It took a long time to dissipate and left lacing on the glass. The body was clear and caramel colored. There was a decent amount of carbonation visible. The nose was filled with toasted grain and brown bread. The taste also started with roasted malt and caramel. It then went into a rye note along with brown bread. There was a touch of brown sugar sweetness as well. The body was on the medium side with moderate carbonation. It had a sticky and lengthy finish with caramel. A bottle of this was $1.75, which came to $.15 per ounce. I thought this beer was a good example of the style and paired well with food.

Since the last brew was so absolutely awful, I had to open another one. I tend not to be a huge lager fan, but I’m really trying to broaden my horizons. So, another German beer from my last beer run. Let’s see how this goes. 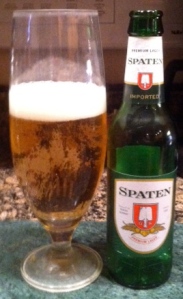 Random: Is there anything decent on the Oxygen channel? Every time I scroll through the channels there is absolute crap on it. I don’t think anyone, including a normal woman would watch it.

One of the first brews that I ever reviewed was another beer from this brewery, Spaten Optimator. That was definitely a big beer to review then. This offering was poured into the closest thing that I have to a pilsner glass. It poured with a thick, two finger, pure white head that dissipated slowly and left no lacing on the glass. The body was a clear, straw yellow color with generous carbonation visible throughout. The nose had grass, straw, pepper and skunkiness to it (which to me took center stage). The taste also had grass, buttery malt and hay. The skunkiness was way more muted on the taste than the nose. It also had some light citrus to it. This was probably one of the best brews of the style that I’ve ever had. The body was a medium thickness with medium carbonation. For a lager, the simple flavors here really did it for me. It was crisp and went down easily, but it actually had flavor to it. The finish was quick with grass. I would definitely have this again.

This was the second brew of the night. I’ve had this brew a few times before, but never reviewed it. I’ve always found that it was a solid hefe and really enjoyed it. This time I had it on draft with the matching glass.

Trivia: According to wikipedia.org, “In 1997 the brewery combined with the Löwenbräu AG to form the Spaten-Löwenbräu-Gruppe. The Spaten-Löwenbräu-Gruppe was sold to Interbrew in 2003. In 2004 Interbrew and the Brazilian Companhia de Bebidas das Américas (AmBev) united to form InBev. The brewhouse in the Marsstraße in Munich was closed due to a lack of workload in 2006 and is now the museum of the company.”

This brew poured with a half a finger of pure white head that dissipated quickly and left some limited lacing on the glass. The body was a hazy orange color with mild carbonation. The nose was all hefe – banana, clove, orange and a hint of lemon. The body was thinner than it looked with moderate carbonation. The taste was a lot of banana and citrus. The clove was a little more muted. This really is the quintessential hefeweizen. It went down really easy and was incredibly refreshing. This is why I initially fell in love with the style. The finish was quick with a bit of banana. I would definitely have this one again. It’s a great example of the style and I would recommend it to someone who wanted to try the style. So yummy.

On Friday night, I went out to Brick House Tavern and Tap. It’s a chain restaurant that’s billed as a mancave. It has a bunch of flat screen televisions, decent food and a pretty good beer list (and the girls are dressed in daisy dukes and low-cut shirts). Not a bad place to go. If you’re in or around Piscataway, I’d recommend it. I got to try two beers (other review will be in next post), Spaten Optimator and Sly Fox Chester County Bitter. Once I ordered this, the waitress sat down with us and asked what it was. She said I was the second one today to order it, and so I spent a few minutes explaining that I try to order a new beer wherever I go. In turn, she was telling us how they keep going through Abita Purple Haze like crazy. They finally got it on tap that morning and expected it to kick by the next day (my girlfriend was happy as Purple Haze on tap is one of her favorites). 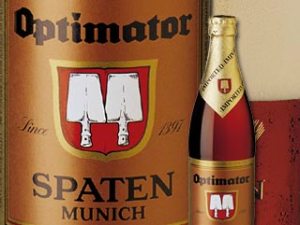 Trivia: Spaten means “spade” in German. The logo of Spaten is a malt shovel.

Random: I always find the history of the bottles so interesting. I didn’t even notice the shovel until I really started looking at the pictures today. There’s so much history, especially in German beers.

Billed as the classic German dark beer, I received the beer in a green bottle, which always seems to remind me of beers that my Dad drank in the 80s. But, anyways, the beer poured a beautiful brown, almost mahogany color. The head was a good two fingers, off-white in color. The beer had some caramel notes on the scent as well as malt. Other people have said some hints of metal came through, but I didn’t get any of that. On first taste, I got a lot of malt and hints of toffee. My girlfriend, who tried it as well, got the flavor of molasses. The mouthfeel was nice and not overly thick with moderate carbonation. I also got a bit of bitterness on the aftertaste. All in all, it was pleasant to drink, but I couldn’t drink more than two, due to the higher ABV.  If you’ve never had it, definitely try it. But, not an everyday beer for me.