Tonight’s selection is the last beer that I picked up from Maine. It came highly recommended from one of the staff members there, and after drinking it, I’m not entirely sure as to why. But, I’m always into trying something new and unique, so let’s pop the cork on this one. 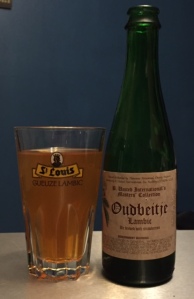 Trivia: According to the importer’s website, “Strawberries announce themselves in the nose where they mingle with aromas of earth, sharp cheddar cheese, vanilla, yogurt, and a Riesling-like petrol note.”

Random: I keep all of my bottle caps and corks. I’m not sure what I’m going to do with them, but I guess I’ll either figure it out or toss them.

The cork was very tight in the bottle, but there was almost no pop when it came out. It poured with absolutely no head on top of a golden-yellow body that was quite cloudy. There was also no carbonation visible. The nose had very little in the way of strawberries or earth, or vanilla. Instead, I just get intense sourness that had white grapes. The taste had a bit more depth, but was again, intensely sour, to the point of being off-putting. It had some vanilla and some oak as well, but the sourness overwhelmed everything. It also had a white vinegar characteristic too. The body was light and there was no carbonation on the beer, which didn’t work for me either. The finish was thankfully quick and again sour. A bottle of this was expensive at $12, which came to $1 per ounce. This beer had a lot going on and it was definitely interesting, but I don’t think I’ll be having it again.